This 284-page book presents historic photos of dozens of individual roadhouses, along with the colorful histories are first-hand accounts of those who stayed at the roadhouses while traveling the early trails and roads of Alaska, including the Reverend Samuel Hall Young, Frank G. Carpenter, Judge James Wickersham, Leonhard Seppala, Col. Walter L. Goodwin, and Matilda Clark Buller, who opened a roadhouse near Nome in 1901, at the height of the Nome Gold Rush.

“A man named Ohlson ran the Lone Star Roadhouse between Minchumina and McGrath. He had been a dog team driver, trapper, and prospector until old age caught up with him. He then settled down to winters in his roadhouse on the Fairbanks-McGrath trail, where he cooked and cared for overnight travelers. Hotcakes, bacon, coffee and two eggs (if you were man enough to take ’em before they took you) was $2.50. There was also moose and caribou stew, which was always good. At $2.50 per meal this was not at all out of line when considering the distance and transportation involved in getting the supplies there.” 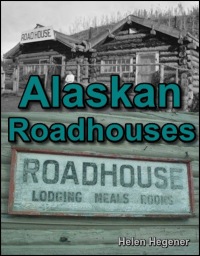