The All Alaska Sweepstakes

The 2008 All Alaska Sweepstakes celebrated the centennial running of a race touted as the granddaddy of all sled dog races. This book celebrates and honors all those who cared to be involved with the undertaking of such a race. The book quickly moves through the organizational process involved with making the Centennial run possible. An outstanding job is done of sorting through all the people and organizations involved with the 2008 race. For the sled dog aficionado, I highly recommend this book. It is excellently organized, highly informative and provides a great bibliography for one to continue their own studies on the subject. -Mushing Magazine, Sept/Oct 2010

The historic All Alaska Sweepstakes is the subject of All Alaska Sweepstakes: History of the Great Sled Dog Race, by Helen Hegener. Hundreds of beautiful photos by Jan DeNapoli, Joe May, Donna Quante and others tell the story of the sixteen Alaskan mushers who entered their teams, each hoping to have their name engraved on the Sweepstakes trophy beside the great mushing legends “Scotty” Allan and Leonhard Seppala. And, of course, they were racing for the richest purse ever offered for a sled dog race: $100,000.00 winner-take-all!

The All Alaska Sweepstakes is the oldest organized distance sled dog race in the world, with records kept by the Nome Kennel Club dating back to the first race in 1908. The route from Nome, on the south side of the Seward Peninsula, to the small community of Candle on the north side and return, is 408 miles, following the telegraph lines which linked camps, villages and gold mining settlements on the Peninsula. This route’s established communication lines allowed those betting on the outcome to track the race more easily from the comfort of saloons like the famed Board of Trade in Nome, where the Nome Kennel Club had been founded the previous year. 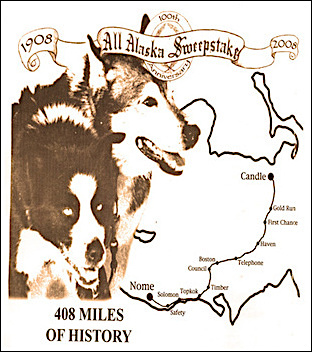 A.A. “Scotty” Allan describes the route to Candle in his classic book Gold, Men and Dogs (G.P. Putnam’s Sons, 1931): “It was selected because the trail to it from Nome goes over all kinds of country, from sea ice to high mountains, with rivers, tundra, timber, glaciers, and everything else in the way of mental and physical hardships en route. We knew there wouldn’t be any doubt about the excellence of a dog or driver that covered it.”

With colorful drivers like “Scotty” Allan and Leonhard Seppala, who each won the race three times, the All Alaska Sweepstakes was an eagerly anticipated annual event until the gold mining dropped off and Nome’s population dwindled, along with local interest in sled dog racing. In 1983 the Nome Kennel Club sponsored the 75th Anniversary race, and Rick Swenson took home the $25,000.00 purse. Then, in 2008, for the 100th Anniversary of the event, the Nome Kennel Club offered the richest purse ever for a sled dog race: $100,000.00 winner-take-all.

All Alaska Sweepstakes, History of the Great Sled Dog Race begins with a look at the colorful history of the race, tracing its gold rush roots and highlighting the stories of intrepid mushers like Leonhard Seppala and “Scotty” Allan, “Iron Man” Johnson and Fox Maule Ramsay, and the heroic dogs like Baldy, Togo, and Fritz. For the Centennial Race some of Alaska’s best-known mushers entered: Lance Mackey, Jeff King, Mitch Seavey, Sonny Lindner, Ramy Brooks, Jim Lanier, Cim Smyth, Aaron Burmeister, Ed Iten, Hugh Neff, and Mike Santos. And then there were the mushers who entered simply to be a part of the history of the race: Kirsten Bey, Cari Miller, Fred Moe Napoka, Connor Thomas, and Jeff Darling, whose musher profile noted that he’d entered “for the historical value and a chance to see some countryside he might not otherwise be able to see by dogteam.” 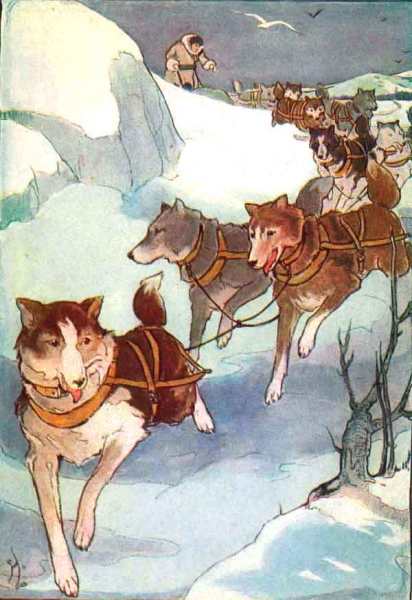 The photo-rich, full color book covers the race from the preliminary festivities such as the crowning of the Sweepstakes Queen, Janice Doherty, and the mushers’ bib drawing, to the historically-themed finisher’s banquet and the awards, not only of the beautiful championship trophy, but also the Alec “Scotty” Allan Humanitarian Award, and the Percy Blatchford “Spirit of the Race” award. Descriptive commentaries by Race Marshal and Lead Judge Al Crane; leaderboard designer and champion musher Jodi Bailey; and dedicated race fan Marcia Claesson, who shared how the race was tracked by mushing enthusiasts from around the world, add depth and perspective to the exciting narrative of this iconic race.

“One of the pilots in Candle asked me if I’d seen any wolves, and I said no, and he said there was a big pack of wolves headed this way. I was about two hours out of Candle on my way to Gold Run and I see all these green eyes about fifty feet off the trail, a hundred yards ahead of me. So I had my headlight on bright and I’m looking at these eyes… My .44 was in my sled so I unzipped my sled bag and I’m looking, there’s a lot of sets of eyes looking at me…” ~ musher Aaron Burmeister sharing tales of the trail at the Finish Banquet.