Still Crazy After All These Years

Still Crazy After All These Years

by Helen Hegener with Rod Perry

Adventure has been a way of life for Rod Perry of Chugiak, Alaska. Now seventy-four, an age when most are slowing way down if not sitting still, Rod has caught another gear and is speeding up.

Perry grew up in Oceanside, Oregon. With the surf pounding out his front door and thousand-year-old forests in back, and with a winter population of just 175 in the 1950s, the little village provided an idyllic setting for an outdoors-crazy kid like Rod to develop. Learning of woods lore was greatly enhanced by a father who never wore a pair of shoes until age twelve, only Sarcee moccasins, having grown up on a homestead and trapline in the foothills of the Canadian Rockies where his father’s hunting and trapping partners were of that First Nations people.

Rod attended Tillamook, Oregon schools, then Oregon State University. In 1967, with a wildlife management degree in his pocket, he put Oregon in his rear-view mirror and headed for Alaska. “Where else could I have gone for my kind of self-expression?”  reflects Perry. “Had I stayed out in America (as he calls the contiguous states) my life would have been dull as dishwater. God didn’t wire me that way.”

Through the years his employments have included work on a moose research project, guiding big game hunters, and operating his commercial fishing boat in the high-risk, high reward waters of Bristol Bay, the world’s richest salmon fishery.

Rod conceived and filmed the iconic Alaska motion picture classic, ‘Sourdough,’ starring his late father, Gil Perry. With son rolling film, dad played an aged trapper and prospector attempting to live out a disappearing lifestyle amidst a dying old-time Alaska. Perhaps no other motion picture which toured the world’s theaters ever started with less. Gil had never acted, Rod had never produced a film, and they began with barely two nickels to rub together. Never hesitant to go where only fools dare to tread, Rod dove headlong into the several-year-long project without a hint of filmmaking experience. In its place was a humble confidence in his God-given artistic sense and a feel for how to craft a magnetically romantic tale of the Old North. 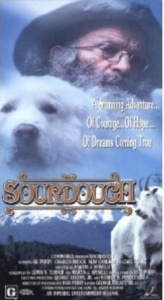 hometown. Then Hollywood’s Albert S. Ruddy (‘The Godfather,’ ‘The Longest Yard,’ many others) engineered the final edit. Since 1977 ‘Sourdough’ has quite likely been seen by more theater goers, TV audiences, and home video watchers than any film ever made in Alaska.

Rod Perry once rode a wild moose, and he has weathered several close shaves with charging grizzlies. But he waves those off as topics unworthy of more than passing mention. What he really likes to recount are his wild adventures by dog team. He has freighted sled loads of supplies for climbers up onto the flanks of Denali. A memorable trip took him to visit Eskimo friends. Mushing north around the frozen shores of the Bering and Chukchi Seas, he stayed a day or two in each little village. On the way, from one high overlook at the tip of the Seward Peninsula, he could see the coast of Siberia across the Bering Straits. The trip ended far above the Arctic Circle.

His most daring trek was to bring twenty-two sled dogs out to the highway system from the remote cabin where he had been living. It would have cost the lives of the small group Perry led if they failed to make it through before their almost thousand pounds of dog and human food ran out.

“Once we traveled beyond a point of no return,” recalls Rod, “it was make it all the way through or die. Out there in that vast trackless country between Mount Denali and the Yukon River there was no trail; we had to make our own. If we had fallen, no one would have known where the wolves and ravens picked our bones.

“It was about 175 grueling miles to the highway system, route-finding by map and compass, cutting our way by axe and bow saw, and breaking trail by snowshoe in front of the dogs. Camps far below zero were made each night wherever darkness overtook us. Only two pieces of canvas comprised our shelter, but that’s enough if you know how.

“We reached the highway the morning of the eighteenth day. Our food had run out the night before.”

Almost eight hundred individuals have completed Alaska’s Iditarod Trail Sled Dog Race. Of their number, those who have taken such a lengthy wilderness trip as Rod’s, and have done it on their own outside of an organized race structure where trail and supplies are established, can be counted on the fingers of one hand.

And so Rod was drawn like a moth to a flame to test drive what would go on to be known the world over as “The Last Great Race on Earth.”

“Recalling the moment I first learned of plans to stage such a stupendous thing as the Iditarod Trail Sled Dog Race still makes the hair on the back of my neck stand on end,” says Rod. “I almost levitated. I could no more turn away from being among the intrepid band that pioneered it than turn down my next breath.

“It was an incredible departure from the standard sled dog racing model of short dashes over manicured trails near towns and villages. The plan was so audacious few thought it could be brought off. According to common opinion, for us to plunge headlong by dog team into a thousand-mile crossing of wild Alaska, in the dead of an arctic winter, was sure proof we were fools.”

With virtually zero belief on the streets in what sounded like a cockamamie goat-rope of an impossible dream, race founder Joe Redington and his few true believers found it impossible to raise adequate funding. But funded or not they were determined to go. With logistical help thin, emergency help non-existent, and organization barely enough to hold things together, Joe needed a seasoned field of veteran bush travelers used to going it alone in Alaska’s winter wilderness. And that’s exactly who came to the starting line—gold prospectors, trappers, big game guides, homesteaders, bush pilots, and, most notably, the final trailing edge of Alaska’s great (pre-snowmachine) Native dog men. Since that first race in 1973, no field of their likes has ever been assembled to run the Iditarod.

“Had we failed, we would have only proven the skeptics correct, erasing the thin amount of credibility we had. That would have made it impossible for even the slight funding Joe had scraped up to be gathered for a second try,” says Perry, “and the event would have died right there.” 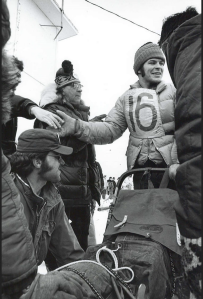 But those hard-to-kill trailsmen, with Iditarod’s very future riding precariously on their shoulders, did not fail. From their glorious success the race would grow to become Alaska’s most world-famous annual event. And although that trailblazing first run through to Nome would go down as the greatest Iditarod adventure of all time, no telling solely about their wild and crazy, sometimes bizarre passage has ever found its way to the screen.

A few years back, Rod was gripped by what a shame it is that the chance to tell the story in that powerful, ‘I was there, I did it’ dynamic is dying as one after the other of Iditarod’s original mushers slip away. With only a dozen of the original entrants left, Rod became more and more driven to do something about preserving the tale.

Rod thought, “What are the chances that one of the elite group of first Iditaroders would be an author (‘TRAILBREAKERS—Pioneering Alaska’s Iditarod,’ available at www.rodperry.com ) and a veteran filmmaker? And then what are the odds that an Academy Award nominated filmmaker, Buzz Rohlfing, would walk up out of the blue and suggest we collaborate on a First Iditarod film? God must be tapping me on the shoulder.”

“It’s gonna blow people away!” exclaims Perry, excitement in his voice and glinting from his eyes. “That first race was so one-of-a-kind, there’s the 1973 Iditarod, and then there are the other forty-four. I’ve chuckled that it was about as foreign-sounding to today’s racers and as distant from today’s race as if it was the tale of Jason and the Argonauts’ voyage in quest of the Golden Fleece!”

There was very little media coverage of that first race, because there was so much skepticism that the 1973 event could be brought off. Once many of the racers returned to their remote homes and villages, most of their stories never saw print, much less the screen. But down through the decades, the hints and whispers that have seeped out from the backwoodsmen who ran it have clothed that incredible odyssey with an alluring aura of rich fables and untold mystery, tantalizingly dangling just beyond reach.

Perry and Rohlfing’s campaign to raise essential funding is kicking off with the start of this 2017 Iditarod. Go to Kickstarter.com  for a view of Rod pitching the film. More information is available at the film’s website, www.menof73.com. Those who heed Rod Perry’s call to jump on his sled runners and ride along on the filming adventure are in for a wild, educational ride into the Iditarod’s glorious untold past.