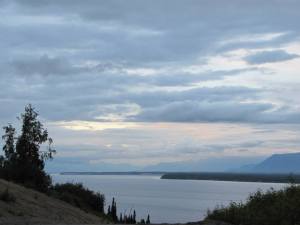 Knik Arm is the northernmost branch of Cook Inlet, a great body of water which stretches 180 miles from the Gulf of Alaska and splits at Anchorage into Knik Arm and the more southern Turnagain Arm.

William Bligh, who served as Captain Cook’s Sailing Master on his third and final voyage, thought that both Knik Arm and Turnagain Arm were the mouths of rivers and not the opening to the Northwest Passage.

Under Cook’s orders Bligh organized a party to travel up Knik Arm, and they quickly returned to report that Knik Arm indeed led only to a river. 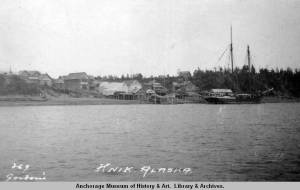 Boats of any kind are a rare sight on Knik Arm today, but in times long past the Arm was traversed by rowboats, freighters, and sailing ships.

George Palmer, a merchant who owned stores in Knik and near the later site of Palmer, frequently crossed the Knik Arm, as cited by Valley historian Colleen Mielke: “Palmer’s first schooner, the two masted ‘C. T. Hill,’ arrived at Knik Harbor June 7, 1913. Leaving his store in the hands of a clerk, Palmer and crew sailed the schooner from Goose Bay to San Francisco, two or three times a summer and brought back merchandise for his store.” And: “In the spring of 1915, Palmer traveled to Seward, by dog sled, where he boarded a steamer to San Francisco to purchase a newer schooner named ‘The Lucy.’ Palmer and ‘The Lucy’ arrived at Goose Bay on May 3, 1915.”

Today’s navigators generally avoid the silty, churning, tide-wrenched waters of Knik Arm. There are far easier ways to get from point A to point B.

This book is a must-have volume for anyone who lives in, travels through, or loves Alaska’s beautiful Matanuska Valley! 140 pages, full color, 8.5″ x 10″ paperback, maps, resources, index and photo index.

• To place a secure order via credit card or Paypal, simply click this image link:

• Also available via IndieBound and on Amazon