Trailing and Camping in Alaska, subtitled Ten Years Spent Exploring, Hunting and Prospecting in Alaska – 1898 to 1909, was written in 1909 by Addison M. Powell, an adventurer, prospector, hunter, and a former guide for Captain William R. Abercrombie’s 1898 Copper River Exploring Expedition, which was one of three military expeditions organized under the direction of the Secretary of War with directives for exploring the interior of the new territory of Alaska. Powell’s familiarity with the land made him a valuable addition to Abercrombie’s efforts over the next several years, and brought him into contact with many men who would help to shape the future of Alaska.

Addison Powell, resting his chin in hand second from the left, with friends and a large nugget of copper found on Nugget Creek, in the Wrangell Mountains, summer of 1902. [Photos are from Addison Powell’s book, Trailing and Camping in Alaska, Wessels & Bissell, 1909]

The May-June, 2019 issue of Alaskan History Magazine included selected excerpts from chapter 21 of Powell’s book, on his explorations around the Copper River country and the Wrangell Mountains. In the spring of 1898, Abercrombie was directed to organize his men and supplies at Valdez, on the coast, and to explore northward into the valley of the Copper River and its tributaries, and farther north to the Tanana River, seeking an all-American route from coastal Alaska to the Klondike gold fields. 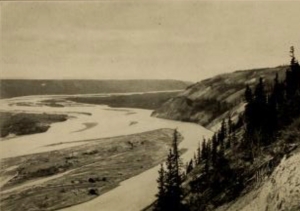 The banks of the Copper River.

The following year Abercrombie would be responsible for constructing a military road from Prince William Sound at Valdez to Eagle on the Yukon River, a route which became known as the Eagle Trail. Powell, who had been exploring and prospecting in the country, once again joined the effort as a guide and surveyor. The following years are filled with exploration, adventures, and a continuing search for a lost gold strike.

Addison Monroe Powell was born November 25, 1856, in Clinton County, Indiana; he was 42 years old when he joined Abercrombie’s 1898 expedition. His sub-report, published in Abercrombie’s 1899 Government Report on the Copper River Exploring Expedition, appears as chapters of this book. Powell passed away in Santa Barbara, California, on January 29, 1932, at the age of 75.

Trailing and Camping in Alaska