“This book will be referenced by future historians for decades to come.” –David A. James, Anchorage Daily News, Nov. 20, 2022 [more on this review below] 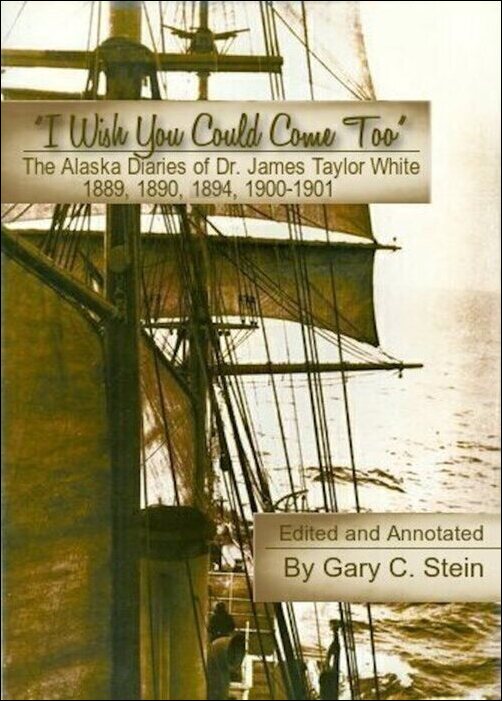 In the last half of the nineteenth century the ships of the U.S. Treasury Department’s Revenue-Cutter Service patrolled the waters of the Bering Sea, the coast of Alaska, and the Yukon River. For several of those voyages a bright and engaging young physician, Dr. James Taylor White, served aboard and recorded his adventurous work in personal correspondence and journals. “I Wish You Could Come Too,” The Alaska Diaries of Dr. James Taylor White, by Gary Stein, Ph.D. provides a first-hand look at life aboard a revenue cutter during Alaska’s early years.

The revenue cutters on which Dr. White served played a crucial role in the history of the north, beginning with the legendary USRC Bear, under the command of Capt. Michael A. “Hell Roaring Mike” Healy. On board the Bear Dr. White took part in patrolling for seal poachers, smugglers, and illegal traders; assisted in the capture and ferrying of Siberian reindeer to Alaska; and witnessed the Bear‘s duties as a floating hospital, courthouse, and rescuer of shipwrecked sailors. His later tours of duty aboard the USRC Rush and the USRC Nunivak included customs duties and enforcement of revenue and conservation laws, search and rescue missions, and bearing witness to the ravages of the 1900 influenza and measles epidemics in Native villages along the Yukon River.

Dr. White had many interests aside from his medical profession; he was also a naturalist, a photographer, a bit of an artist, an astute observer, and an amateur ethnographer particularly fascinated by Native cultures and traditions. Dr. White served as a contracted physician with the Revenue-Cutter Service during two decades of significant events, people, and trends in Alaska’s history. His diary entries are jumping-off points from which to see how Alaska’s history played out around him, while the author’s prologues and epilogues to each diary, along with extensive annotations, add contextual details about Alaskan history.

More than simply a dry text about historic events, Gary Stein’s book is the result of four decades of research, during which he developed an affinity for the good doctor, writing, “I met James T. White in 1980 while I was researching in the Alaska and Polar Regions Collections & Archives at the University of Alaska Fairbanks. We instantly became fast friends. He had been dead for sixty-eight years, but he let me pry into his life through his diaries, correspondence, scrapbooks, photographs, and natural history and ethnological collections located in various archives, museums and cemeteries in Alaska, Washington State, California, and Washington, D.C. We are friends still—I’ve even smoked a pipe with him at his grave—and there is a great deal of his life to share.”

A good review of Dr. Gary C. Stein’s 2021 book, “I Wish You Could Come Too”: The Alaska Diaries of Dr. James Taylor White 1889, 1890, 1894, 1900-1901, by Fairbanks-based reviewer David A. James, appeared in the Sunday, November 20, issue of the Anchorage Daily News. James describes Dr. White as “a physician who made multiple journeys north to Alaska as a member of various Revenue Cutter Service crews, and who kept personal records of what he encountered along the way.” He adds, “He had a highly observant nature and interests in botany, ethnography and other fields that educated persons of his era were drawn to. Even more so, he had a sense of adventure, and the sea was his calling.”

Dr. Gary Stein published numerous articles and book reviews in the Society’s journal and published his seminal work on Dr. James Taylor White of the U.S. Revenue Marine Service in Alaska with Northern Light Media, in January, 2021. He would have smiled to read David James’ review of his book, especially the last two sentences: “Stein didn’t live to see it published, but he’s left us a gift. This book will be referenced by future historians for decades to come.” The review can be read online.

The Spring 2022 issue of The Sea Chest, the Puget Sound Maritime Journal, featured a lengthy review of Dr. Gary Stein’s book, “I Wish You Could Come Too” : The Alaska Diaries of Dr. James Taylor Stein, published in October, 2021 by Northern Light Media.

Reviewer and Puget Sound Maritime Board Member J. Pennelope Goforth notes, “Of Dr. White’s many adventures, those aboard the USRC BEAR–commanded by Captain Michael A. ‘Hell Roaring Mike’ Healy–were the most dangerous and varied. Revenue cutters enforced U.S. laws against pelagic sealing, smuggling alcohol and trading illegally with Alaska Natives. Dr. White assisted in the purchase of hundreds of reindeer in Siberia which the BEAR then transported to the Inupiaq Eskimo of northwestern Alaska. He patched up crew members, ministered to sick Alaska Natives, and cared for injured whalers as the BEAR provided medical services during the long summer cruises…. Dr. White was witness to the varied duties of BEAR including customs and law enforcement, as well as justice when Federal judges held court on the ship.”

After explaining how Dr. White also served about the Revenue Cutters RUSH and NUNIVAK, and acknowledging “the legacy White left us through his diaries, scrapbooks, photographs, and ethnographic materials is unusual in Alaskan historiography,” Goforth adds, “Dr. White’s diaries are worth reading for the sheer adventure of a life lived at sea and on the Yukon River during those little-known years of Alaska history. However, Dr. Stein’s extensive knowledge as annotated in White’s prologues and epilogues create a fitting stage for understanding the times in which White experienced Alaska. Dr. Stein draws on his years of meticulous research, poring over ship’s logs, archived personal papers, and Federal government documents. His annotations alone constitute a solid course in Alaska maritime history.”