From the January-February, 2020 issue of Alaskan History Magazine:

“The men take up the packs, and this is what happens: They walk to the base of the cliff, with a stout alpenstock in hand. They start to climb a narrow foot-trail that goes up, up, up. The rock and earth are gray. The packers and packs have disappeared. There is nothing but the gray wall of rock and earth. But stop! Look more closely. The eye catches movement. The mountain is alive. See! They are going against the sky! They are human beings, but never did men look so small.” ~Tappan Adney for Harpers Weekly, 1897 Freight and supplies unloaded near the Long Wharf at Dyea, circa 1898. Photographer Eric A. Hegg. University of Washington Libraries, Special Collections, [HEG117]

The Dyea Trail, or as it would come to be known, the Chilkoot Pass Trail, began on the broad, flat flood plain delta of the Taiya or Dyea River. The trail ascended gently, following the 17-mile-long river through the mountains. After about 12 miles the trail began to rise sharply, gaining over 1,600 feet in just two and a half miles. Then the steep climb over the pass itself, followed by trails leading down the eastern flanks, where long lakes provided easier travel, whether by canoe or toboggan. The route had been used for travel and trade by the local indigenous groups long before the rest of the world discovered this part of the north.

On July 14, 1897 the S.S. Excelsior docked in San Francisco and sparked a fevered interest among the veteran California gold miners. Three days later the S.S. Portland arrived at the port of Seattle with its legendary ‘ton of gold,’ and the west coast—indeed the entire nation—went mad for the Klondike diggings. A special edition of the Seattle Post-Intelligencer desclared in bold headlines “Gold! Gold! Gold! Gold!” and local outfitting stores began emptying their shelves overnight, as men and women hastily grabbed for whatever supplies they could and caught the next ship north. Where there had been a trickle of hopeful prospectors searching for another El Dorado, there was now unleashed a flood tide of humanity in all its incarnations. Over the next few years an estimated 100,000 stampeders would join the rush to the north, and the bulk of them were headed for Dyea. There were other routes, to be sure, such as the White Pass Trail out of nearby Skagway, of which Samuel E. Moffett wrote in 1903, “By the White Pass route you did not have the precipitous ascent of the Chilkoot, but you had to go twice as far, and you struggled through bogs in which you were likely to leave your horse and, perhaps, your entire outfit as well. The whole trail was blazed by the carcasses of dead horses.” That passage would come to be known as The Dead Horse Trail, but when the White Pass and Yukon Railway was completed in August, 1900, it quickly became the route of choice. Within a few years, as the rush to the Klondike assumed major proportions, the steps cut into the snow and ice of Chilkoot Pass would become known as the “Golden Stairs,” and men would proceed up in lockstep fashion, a image which might be utterly unbelievable if not for the photographs proving it so. Four miles below the summit, Sheep Camp would become a haphazard tent town of more than a thousand souls, with fifteen hotels, innumerable eating places, and even a hospital to tend those wounded on the trail.

Far below, at tidewater, the boomtown of Dyea grew up around the Healy & Wilson trading post in the fall of 1897, as word of the Klondike gold strike brought increasing numbers of people north. The National Park Service website describes the growth of Dyea: “As late as September 1897, Dyea was still nothing more than the Wilson & Healy trading post, a few saloons, the Tlingit encampment, and a motley assemblage of tents. In October, speculators mapped out a townsite, but Dyea’s biggest growth did not begin until the Yukon River system began to freeze up and the winter storms slowed traffic on the Chilkoot Trail. Without the ability to dash up the trails, people began spending more time in Dyea and it became more town-like.”

Deteriorating pilings are all that remain of the Long Wharf at Dyea. Photographed in 1986  by Jet Lowe for the Historic American Engineering Record (Library of Congress HAER AK-38)

A long wharf, almost two miles in length, was begun in 1897, shortly after the platting of the townsite, by promoter L. D. Kinney. The wharf was 50 feet wide, 4,000 feet long, and extended from low tide to deep water, being 34 feet deep at the shore end and 60 feet deep at the outer end, with pilings driven 25 to 50 feet into solid ground. Completed in May 1898, the great wharf extended almost two miles across the mud flats and into deep water, and connected to Broadway which led directly into town.

During the winter of 1897-1898, Dyea grew until the downtown area was about five blocks wide and eight blocks long. At the height of its prosperity the town boasted over 150 businesses, mostly restaurants, hotels, supply houses, and saloons. There were also doctors, a dentist, attorneys, bankers, photographers, realtors, two newspapers, two telephone companies, a volunteer fire department, two hospitals and three undertakers, who were pressed into service when a devastating avalanche roared across the trail on Palm Sunday, April 3, 1898, killing over 70 people.

The Klondike Gold Rush National Historical Park was created in 1976, a four unit park comprised of the Dyea and Chilkoot, Skagway, and White Pass units in Alaska; and the Seattle unit in Washington state, memorializing the historical period during the Gold Rush. The site of the town of Dyea and the route of the Chilkoot Trail were designated as National Historic Landmarks in 1978, officially recognized by the United States government for their national historical significance. 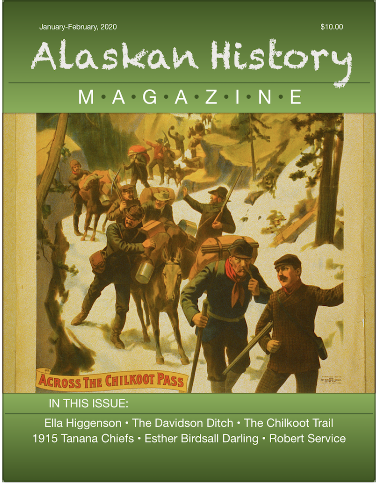