The May-June, 2019 issue of Alaskan History Magazine features an article and photographs of the construction of the Alaska Railroad, from 1902, when the Alaska Central Railroad was begun in Seward, through 1923, when President Warren G. Harding drove the golden spike in Nenana to open the Alaska Railroad. The article is based on the book by Helen Hegener, The Alaska Railroad 1902-1923 (Northern Light Media, 2017), and the broader railroad history below is edited from the book. 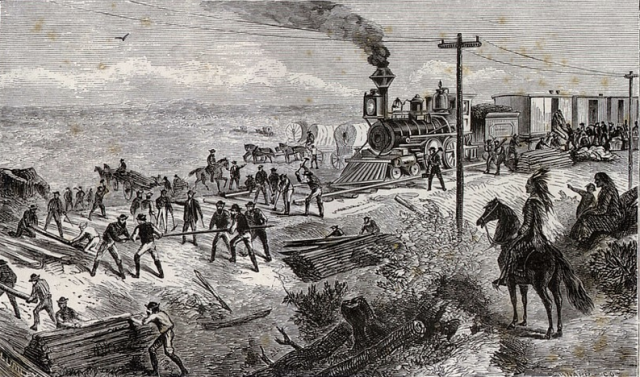 In the American west, during the latter half of the nineteenth century, the proliferation of railroads provided a rapid, versatile, and relatively low-cost means of transportation across the vast distances of the midwest and the Great Plains. But the railroads did not come easily, and they did not come without a large measure of doubt and ridicule. One prominent government official reportedly scoffed about the proposal of railroad travel, certain that it was not forthcoming anytime soon and pronouncing, “I would not buy a ticket on it for my grandchildren!”

Development of the west was considered a fool’s errand in the early years, the land deemed fit only for cattle and the wild and reckless cowboys who tended them on long drives to market. The great statesman Daniel Webster had growled about the West in 1845, “What do we want with this region of savages and wild beasts, of deserts, of shifting sands and whirlwinds of dust, of cactus and prairie dogs?”

By 1852 there was only a single five-mile track of rails west of the Mississippi River, but within a single generation more than 116 million acres of land would be granted to the railroads, and only eighteen years later, in 1870, more than 72,000 miles of track would criss-cross the western territories. When the last spike was driven to complete the Great Northern Railway’s track in 1893, five railroads spanned the West, and these five railroads would change the course of western history.

The Yakutat and Southern Railway

Those early western railroads had an impact on the development of Alaska, for wise men noted that what had worked to open the American West to pioneering settlement and sowing the seeds of progress might work as well in the frozen north. And so, in the history of Alaska, as in other parts of the world, railroads played a large role, and were a major influence. In the early part of the twentieth century there were almost two dozen railroads at various stages of operation in the territory, including the Alaska Anthracite Railroad, Alaska Central Railway, Alaska Home Railroad, Catalla and Carbon Mountain Railway, Copper River and Northwestern Railway, Council City and Solomon River Railroad, Golovin Bay Railroad, Nome Arctic Railway, Northern Alaska Railway, Tanana Valley Railroad, Valdez-Copper River and Tanana Railroad, Wild Goose Railroad, and the Yakutat and Southern Railway. 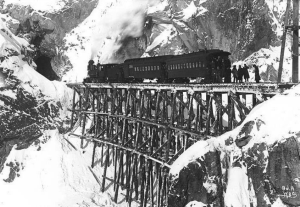 Many of these railroads were built and operated by various mining interests, others were funded by farsighted groups or individuals who understood the potential profitability of steel rails providing reliable access to a new and growing land. Of the many attempts and endeavors, only two remain in operation today, the White Pass and Yukon Railway from Skagway, Alaska to Whitehorse, Yukon Territory; and the Alaska Railroad from Seward to Fairbanks. Over the years all of the other railroads have either been absorbed by larger, more successful lines, gone bankrupt when funding ran out or resources were depleted, or simply outlived their usefulness as times changed and populations moved on.

There are still many signs of the old railways across Alaska, and some have become almost iconic, such as the long-abandoned steam engines of the Council City & Solomon River Railroad, known as the “Last Train to Nowhere;” or the photogenic bridges and trestles of the Copper River and Northwestern Railway along the McCarthy Road. But colorful legacy or none, hundreds of miles of steel rails which opened the territory of Alaska to development now sit silent, unused, untraveled; mute reminders of a time when the forbidding terrain and harsh climate of Alaska yielded to the building of an Iron Trail.

An almost 100-year-old publication offers a unique look at the Alaska Railroad: 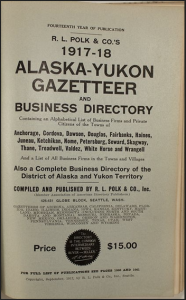 The 1923 edition of Polk’s Directory, published shortly after the official opening ceremony of the railroad in Nenana, included the following description of the Alaska Railroad’s construction, the broader operations which fell under the railroad’s authority, a vivid look at the profound impact the railroad had on transportation within the territory, a suggestion for adventurous tourists, and a short but compelling description of the route followed from sea level to interior Alaska.

The U. S. Government Railway Project in Alaska was originally reported on by the Alaska Railroad Commission, appointed by President Taft in 1912, and headed by General Jay J. Morrow, now Governor of the Panama Canal. Upon receiving authority by the Act of March 12, 1914, to go ahead with location, construction, etc., the President placed supervision of the project under the direction of the Secretary of the Interior and designated the Alaskan Engineering Commission as the construction agency to be permanently resident in Alaska to handle the work.

After additional surveys and investigations, the President selected the route in the spring of 1915, and active construction continued since that date except for the greatly curtailed activity during the war. On the 15th of July, 1923, the late President Harding drove a golden spike at the north end of the Tanana River Bridge, Nenana, Alaska, thereby officially completing the construction of The Alaska Railroad.

OPERATIONS OF THE ALASKA RAILROAD 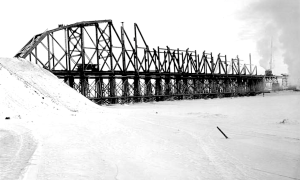 The distance from Seward to Fairbanks, over the operated line, is 470.3 miles. Spurs to the Eska, Jonesville, and Chickaloon coal mines in the Matanuska District, and to the Healy River coal mines in the Nenana District, aggregate an additional 46 miles of standard gauge. A four and one-half mile narrow gauge spur to the Moose Creek coal mines and a 39-mile narrow gauge branch from Fairbanks to the gold creeks as far as Chatanika bring the total operated mileage up to 560 miles. The Alaska Railroad also operates a River Boat Service on the Tanana and Yukon Rivers between Nenana and Holy Cross, a distance of 750 miles, carrying passengers, mail, express, and freight.

It has through billing agreements covering freight service from Seattle or Tacoma to points on the Yukon River and its principal tributaries between the International Boundary at Eagle and Bering Sea at St. Michael. It also has an agreement covering automobile service on the Richardson Highway from Fairbanks to Chitina and Valdez, 410 miles. In addition, it operates telegraph and telephone lines, coal mines, docks, power plants, hospitals, hotels, and commissaries.

In 1915, Seward and Fairbanks were flourishing towns, each being the distributing center for an immense hinterland. Seward received its supplies all year round by ocean service from Seattle. Fairbanks received all its supplies by river boat during the open season of navigation. The country between was an almost uninhabited wilderness. The only overland route then in existence was the Richardson Highway, some 200 miles eastward of the route selected for the railroad. It was necessary therefore to develop and carry various agencies along with the actual railroad construction. Ocean docks, towns, and camps, machine shops, hospitals, schools, etc., all had to be provided. Rolling-stock, construction equipment and supplies of all kinds had to be shipped in from Seattle. Such supplies were then carried inland by boat or pack-horse in summer and by horse-sled or dog-team in winter.

In the actual construction, clearing of right of way, grubbing, grading, excavation and other kinds of labor which could be standardized, were let out to station-men. All tools, powder, camp equipment, subsistence supplies, etc., were rented or sold to the station-men by the railway supply department. Building of bridges, snowsheds, laying of track etc., were performed on force account. Several large steel bridges were fabricated and erected by contract, the piers and approaches being built on force account.

Chena, on the Tanana River

The entire transportation situation in the Territory has been changed by the completion of The Alaska Railroad. Whereas, heretofore it had been necessary for all supplies for an entire year to be shipped up the Yukon River during the short summer season, with the attendant heavy charges for interest on investment, insurance, storage, deterioration, and depreciation, it is now possible to distribute the same shipments throughout the entire year. Frequently shipments missed the last boat, causing great inconvenience and even distress.

For example, in the fall of 1920 an important bridge was ordered for a stream crossing about 28 miles out of Fairbanks. This bridge was shipped from Seattle to St. Michael in the summer of 1921 soon after navigation opened. It caught the last boat up the river. An early freeze-up caught this boat 200 miles short of destination. As it would have cost $135 per thousand board feet for freighting over the snow, the bridge as well as all other supplies lay there till the summer of 1922, when it reached Fairbanks, was freighted overland and erected. Meanwhile, about $1,200 was spent on patching up the old bridge to carry the 1921 traffic. Last winter, a 250-foot highway bridge was taken down, using ice as false-work, freighted three miles by bob-sled to The Alaska Railroad, hauled about 400 miles over the Alaska Range into the interior, freighted 12 miles again over the snow by bob-sled and re-erected over another river, again using ice as false-work, and all in less than 90 days.

In another case, a rush order of 200 tons of heavy mining equipment left Seattle in January of 1923. In sixty days, these supplies traveled 1,600 miles by ocean freighter to Seward, 470 miles by rail to Fairbanks, and 86 miles by bob-sleds drawn by caterpillar tractors over the Richardson Highway and tributaries to their final destination. Without The Alaska Railroad, that equipment would have landed in Fairbanks during the summer of 1923, where it would have lain till mid-winter of 1924 when snow conditions would permit it to be handled over the last 43 miles of sled-road tributary to the Richardson Highway.

With the completion of The Alaska Railroad, a most remarkable circular tour through the interior of the Territory is now possible. This tour included a 1,600-mile ocean voyage from Seattle or Vancouver up the Inside Passage, then across the Gulf of Alaska, through Prince William Sound, and up Resurrection Bay to Seward, touching at all Alaskan ports; then 470 miles over The Alaska Railroad to Fairbanks, then 320 miles over the Richardson Highway to Chitina, then 130 miles over the Copper River & Northwestern Railway to Cordova, and then a 1,400-mile return ocean voyage through Prince William Sound, the Gulf of Alaska, and the Inside Passage. This tour was formally inaugurated last summer by the Brooklyn Daily Eagle party of 70 people, over half of them being ladies. The entire tour requires three weeks from Seattle back to Seattle and costs about $350, all expenses included.

Leaving Seward, The Alaska Railroad crosses the Chugach Range through two passes amidst snow-covered mountains, glaciers, and lakes, then follows the shore of Turnagain Arm to Anchorage, Mile 114. It then follows Knik Arm, crosses the Matanuska Valley, and follows up the Susitna River to the summit of the Alaska Range through Broad Pass, Mile 313, elevation 2337 feet. Several large glaciers are passed within a stone’s throw of the track. There are tunnels, trestle spirals, and one complete loop where the track makes two reversed horseshoe bends and then crosses under itself. The Susitna River is crossed upon a simple steel truss of 504-foot span. Hurricane Creek is crossed upon a steel arch of 384-foot span, 300 feet above the creek.

After leaving Broad Pass, The Alaska Railroad follows down the north slope of the main Alaska Range, past Mt. McKinley National Park, through the Nenana and Healy River Canyons, and across the Tanana River bottom to Nenana. At Nenana the Tanana River is crossed on a 700-foot bridge, 45 feet above the highest high water. The railroad then follows up the valley of Coldstream, across a low divide, and into Fairbanks.  ~•~