The Sept-Oct, 2019 issue of Alaskan History Magazine includes an excerpt from Josiah Edward Spurr’s account of the first expedition to map and chart the interior of Alaska for the United States Geological Survey, in 1896. It was the first of two expeditions of historic importance, the second being his 1898 exploration down the length of the Kuskokwim River, naming mountains, mountain ranges, creeks, rivers, lakes and glaciers. At the end of the Kuskokwim expedition he made the first scientific observations of the Mount Katmai volcano, and what later became known as the “Valley of Ten Thousand Smokes.” After charting these regions, Spurr became the world’s leading geological consultant, and was generally regarded as one of the world’s foremost geologists. During the gold rush era his books were considered the definitive work on Alaskan minerals. Mt. Spurr, an active volcano 80 miles southwest of Anchorage, is named for him.

In this excerpt, illustrated with photos from Spurr’s book, Through the Yukon Gold Diggings (Boston: Eastern Publishing Company, 1900), he and his men have traveled over Chilkoot Pass and down the Yukon River, arriving in Circle City, and setting out to explore the Birch Creek gold mining district: “We landed in front of the Alaska Commercial Company’s store, kept by Jack McQuesten. On jumping ashore, I went up immediately, in search of information, and as I stepped in I heard my name called in a loud voice. I answered promptly ‘Here,’ with no idea of what was wanted, for there was a large crowd in the store; but from the centre of the room something was passed from hand to hand towards me, which proved to be a package of letters from home—the first news I had received for over two months. On inquiry I found that the mail up the river had just arrived, and the storekeeper, who was also postmaster ex officio, had begun calling out the addresses on the letters to the expectant crowd of miners, and had got to my name as I entered the door—a coincidence, I suppose, but surely a pleasant and striking one.

“We obtained lodgings in a log house, large for Circle City, since it contained two rooms. It was already occupied by two customhouse officers, the only representatives of Uncle Sam whom we encountered in the whole region. One room had been used as a storeroom and carpenter-shop, and here, on the shavings, we spread out our blankets and made ourselves at home.

“The building had first been built as a church by missionaries, but as they were absent for some time after its completion, one room was fitted up with a bar by a newly arrived enterprising liquor-dealer, till the officers, armed in their turn with the full sanction of the church, turned the building into a customs house and hoisted the American flag, on a pole fashioned out of a slim spruce by the customs officer himself. The officers, when we came there, were sleeping days and working nights on the trail of some whisky smugglers who were in the habit of bringing liquor down the river from Canadian territory, in defiance of the American laws.”

The entire text of Spurr’s book can be read or downloaded free at Gutenberg.org 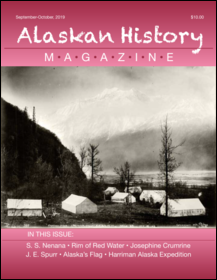