“One day in March 1899, Edward H. Harriman strode briskly into the office of C. Hart Merriam, chief of the U.S. Biological Survey. Without appointment or introduction, Harriman launched into a grand plan for an expedition along the coast of Alaska. Merriam, skeptical, listened politely, and, when Harriman left, checked the man’s credentials. He soon learned that E.H. Harriman was a highly respected railway magnate, who had the financial resources and the talent to realize such a grand scheme.” ~PBS In the Sept-Oct, 2019 issue of Alaskan History Magazine featured the story of the wondrous 1899 Harriman Alaska Expedition, which explored the coast of Alaska for almost two months, in June and July 1899. Edward H. Harriman was a wealthy railroad magnate, one of the most powerful men in America, with control of several railroads, but by early 1899 he was literally exhausted. His doctor decreed that he needed a long vacation, so Harriman decided to go to Alaska to hunt Kodiak bears, but rather than go alone, he took with him a community of scientists, writers, and naturalists to explore and document the Alaskan coastline.

Harriman had the 250-foot steamship George W. Elder refitted for the expedition with lecture rooms, a library with over 500 volumes on Alaska, a stable for animals, taxidermy studios, and luxurious rooms for his passengers, who comprised a hand-picked cream of the crop: America’s best scientists, naturalists, writers, artists, and photographers of the time, such as John Muir, Edward Curtis, William Dall, Henry Gannett, George Bird Grinnell, and many other botanists, biologists, geologists, artists and photographers, men whose names would go into the history books. Harriman also brought a medical team, a chaplain, hunters and packers, guides, and taxidermists. He brought his family and his servants, and with the crew of the Elder, the total number of people on the ship was 126. It was a splendid expedition by anyone’s measure, and has been the subject of many books, articles, and papers. 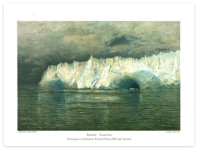 The scientific reports of the Harriman Alaska Expedition included maps and charts showing the over 9,000 mile expedition route and geographical features of the coast. As with most scientific expeditions, the surveys and resulting maps were based on the work of earlier surveys and on the findings during the expedition itself.

“History has shown that the Harriman Alaska Expedition lived up to all expectations: genera and species new to science were described, fossil species newly recorded, natural history collections created, and the Harriman Fiord surveyed for the first time. By any standard, the world’s scientific and environmental portrait of Alaska was greatly enriched as a result of the 1899 Harriman Alaska Expedition.” ~PBS

On July 22, 2001 over two dozen scientists, artists, and writers left Prince Rupert, British Columbia on the Harriman Expedition Retraced. The Clipper Odyssey followed the itinerary of E. H. Harriman’s lavishly-outfitted George W. Elder, sailing through the Inside Passage, the Gulf of Alaska, the Aleutian Archipelago, and northward through the Bering Sea. Four weeks later, on August 20, the travelers made their final stop in Nome.

The Expedition Log details the journey, and just as their 1899 predecessors had done, the expedition guests shared their findings and experiences through photos, artwork, a wonderful souvenir album, and a series of onboard lectures on a myriad of subjects. Use the Site Index to fully explore this wonderful resource commemorating the Harriman Alaska Expedition. There are many fascinating extras, such as this essay on The Boyhood of Harriman and information about The Documentary Film based on the two voyages. For a preview of that film, click here.

• University of Washington Libraries Digital Collection of Harriman Expedition Photographs: 254 photographs, including images of Alaskan Native Americans and their villages, scenic views of the coastline, glaciers and Alaskan towns.

• The greatest benefit of the expedition turned out to be the sizable published record of the journey, which Harriman financed. The fourteen-volume Harriman Alaska Series was published by Doubleday beginning in 1901, and remains a landmark of Arctic exploration. The series is available as free downloads: