The July-Augus, 2019t issue of Alaskan History Magazine includes an article about the venerable world traveler, Frank Carpenter (1855-1924), a photographer, journalist, and lecturer whose writings helped popularize world geography and cultural anthropology. With his daughter Frances (1890-1972), Frank Carpenter photographed Alaska and collected the images of other Alaskan photographers between 1910 and 1924. The article in Alaskan History Magazine tells of a trip he and Frances made across the Kenai Peninsula in 1916, from Seward to Sunrise, a gold mining camp near Hope, on Turnagain Arm.

First working as a journalist for the Cleveland Leader, Frank Carpenter became a correspondent for the American Press Association in 1884. By 1878 his writings were being widely syndicated in newspapers and magazines, and in 1888 he and his wife embarked on a trip around the world, describing life in the countries they journeyed through. Carpenter’s real estate holdings in Washington made him a millionaire, and he was a Fellow of the Royal Geographical Society, the National Press Club, and numerous scientific societies. In 1898 the Carpenters traveled 25,000 miles in South America, and from the mid-1890s until he died, Frank Carpenter traveled around the world almost continuously, authoring nearly 40 books and hundreds of magazine articles about his extensive travels. Carpenter wrote standard geography textbooks and lectured on geography, and he wrote a series of books called Carpenter’s World Travels which were very popular between 1915 and 1930. 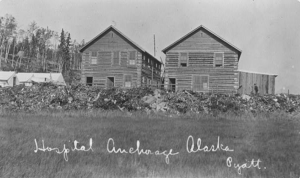 In 1893 The San Francisco Morning Call wrote “He stands at the head of the syndicate correspondents of the United States.  What he writes is read every Sunday in twenty of the biggest cities of the Union, and his newspaper constituency must at the lowest amount to a million readers every week.” Frank Carpenter (right) with Jafet Lindberg, one of the founders of Nome, Alaska.

The Library includes this notation about the prints: “Within the albums, English captions accompany most images, but dates are not consistently indicated. The Carpenters may have taken many of the images, especially those made 1910-1924, but the albums also include images that they collected, and the origin of such images is not always noted.”

An excerpt from Carpenter’s 1923 book, Alaska, Our Northern Wonderland:

“The biggest thing in Alaska is the government railroad. By that I do not mean so much its five hundred miles of tracks, its cars and equipment, or the number of tons and passengers it will haul, but what it stands for in the future of the territory. It means the building of feeder wagon and motor roads and the construction of other railroads. It means cheaper coal, lower freight rates, lower living and mining costs. It means more lands and resources flung open to the settler and the prospector. It means a new era of development and prosperity for Alaskans. “ 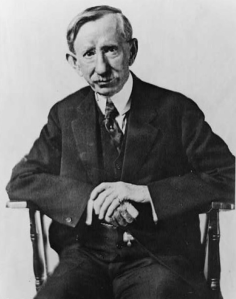 Carpenter died of sickness in 1924 while in Nanking, China, on his third trip around the world, at age 69. The Boston Globe obituary observed he “always wrote fascinatingly, always in a language the common man and woman could understand, always of subjects even children are interested in.”

More photos and excerpts from Frank Carpenter’s book about his travels and writing can be found in this book, which includes an excerpt from Carpenter’s 1923 book, Alaska, Our Northern Wonderland: Alaska and the Klondike: Early Writings and Historic Photographs