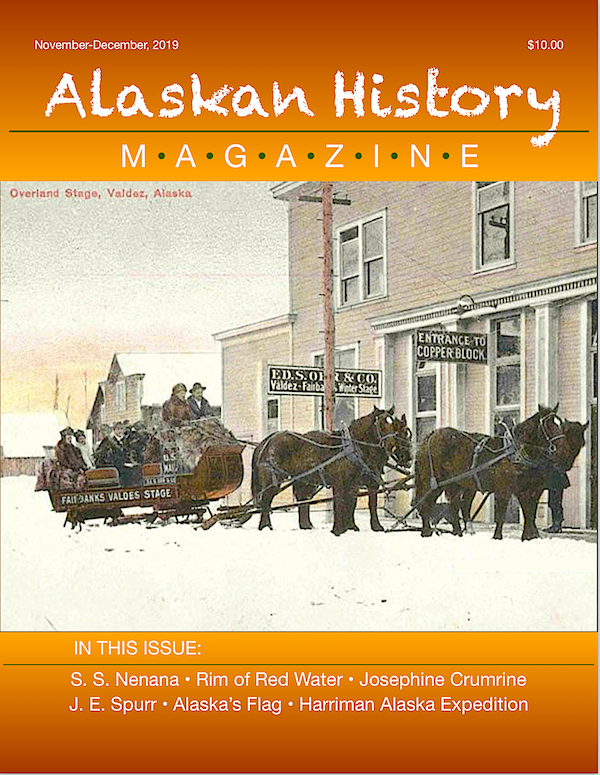 This issue includes articles on The Kink in the Fortymile River • The WPA Guidebook to Alaska • The Orr Stage Company • The Woodchopper Roadhouse • Elizabeth Peratrovich • Glenn and; Mendenhall in the Matanuska Valley, 1898 • and much more!

The Nov-Dec, 2019 issue ranges widely across Alaska, from the early settlements of Tyonek and Knik to the frontier towns of Cordova, Chitina, and Valdez, and from the goldfields of the Fortymile District to the halls of the Territorial legislature in Juneau. Articles for this issue include a guidebook to territorial Alaska from President Franklin D. Roosevelt’s U. S. Work Progress Administration (WPA), a New Deal jobs program which created the Federal Writers Project. An unusual but little-known earth-moving project, notable for the remote location and for the size of the undertaking. The Ed. S. Orr Stage Company, an important part of our past, which proudly claimed “Eight day service between Valdez and Fairbanks, a distance of 364 miles,” and “All stages equipped with abundance of fur robes and carbon-heated foot warmers.” The Woodchopper Roadhouse, at one time the oldest and largest log structure on the Yukon River between Eagle and Circle City. The story of pioneer Native rights activist Elizabeth Peratrovich. The 1898 explorations of Capt. Edwin F. Glenn and W. C. Mendenhall through the Matanuska Valley.  Shorter features on pioneering Alaskan artists, color postcards from the turn of the century, a timeline, an index to the 2019 issues, and a few classic Alaskan books worth seeking out make this issue another worthwhile addition to your library shelves.