The Origins of Mushing 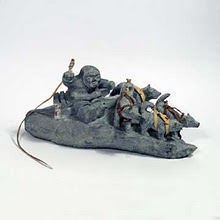 “All the tribes of the Asiatic coasts, from the Ob to the Bering Strait, to Greenland and Kamchatka, harness their dogs to their sleds, in order to make long journeys and transport cumbersome burdens.” – Baron Ferdinand P. Von Wrangell, in Le Nord de la Siberie, 1843.

There’s a historically interesting article on the Alaska Science Forum, dated March 23, 1987, noting the Yukon Quest and Iditarod sled dog races were over for the year, and adding “…but it is still interesting to ponder the origins of dog mushing.”

The contributor, Oscar J. Noel, wrote: “I am reminded of a query to the “Dear Bud” column in the Anchorage Times: ‘Did our Alaska Eskimos and Indians have dog teams before the arrival of the white man?'” 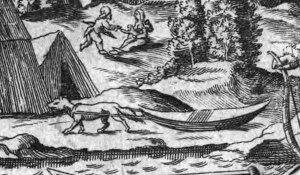 From Martin Frobisher’s “Historic Navigations,” circa 1675

Noel replies in part: “Recently, I came across an illustration taken from the 1675 edition of Martin Frobisher’s “Historic Navigations.” This illustration shows, in the background, a dog in harness, pulling what appears to be a canoe-like sled, or perhaps what might be called a pulk. This illustrates that at the time of earliest contact with Europeans the Eskimos were indeed using dogs as draft animals.”

Mr. Noel continues: “I find in the book, ‘The World of Sled Dogs,’ by Lorna Coppinger, that the earliest historical records of the use of sled dogs in the Siberian subarctic appear in Arabian literature of the tenth century; in writings of Marco Polo in the thirteenth century; and of Francesco de Kollo in the sixteenth.” 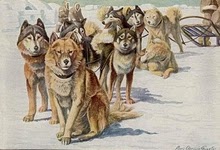 Lorna Coppinger writes a little later in her book about Eskimos with trained dogs on long leashes which would sniff out the breathing holes of seals under the ice, and migratory peoples of the north using dogs as pack animals at first, with some packs being enormous and dragging on the ground, but added that “At a walk, a dog could carry a pack equal to his own weight all day long.”

She continues that in winter the sleds the dogs pulled would result in increased mobility, and notes, “Man and dog got on so well together, each providing the other with certain necessities, that they probably migrated together across the frozen Bering Strait to North America,” and what is now Alaska. 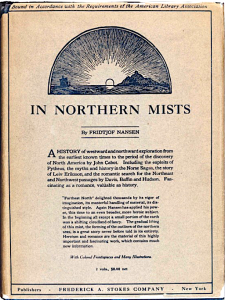 In his 1911 book, a two-volume history of arctic exploration titled Northern Mists: Arctic Exploration in Early Times, the reknowned Norwegian explorer Fridtjof Nansen quotes from the fourteenth century Arabian chronicles of Ibn Batuta, a businessman trading near what is now Kazan in Russia. The Arabian dwelled with appreciation on the sight of sled dogs, noting that “Ibn Batuta (1302-1377) has no name for this people, any more than Abu’lfeda; but he calls their country ”the Land of Darkness’ and has an interesting description of the journey thither. He himself, he says, wished to go there from Bulgar, but gave it up, as little benefit was to be expected of it. That land lies 40 days’ journey from Biilgar, and the journey is only made in small cars drawn by dogs. For this desert has a frozen surface, upon which neither men nor horses can get foot- hold, but dogs can, as they have claws. This journey is only undertaken by rich merchants, each taking with him about a hundred carriages [sledges?], provided with sufficient food, drink and wood; for in that country there is found neither trees nor stones nor soil. As a guide through this land they have a dog which has already made the journey several times, and it is so highly prized that they pay as much as a thousand dinars [gold pieces] for one. This dog is harnessed with three others by the neck to a car [sledge?], so that it goes as the leader and the others follow it. When it stops, the others do the same.”