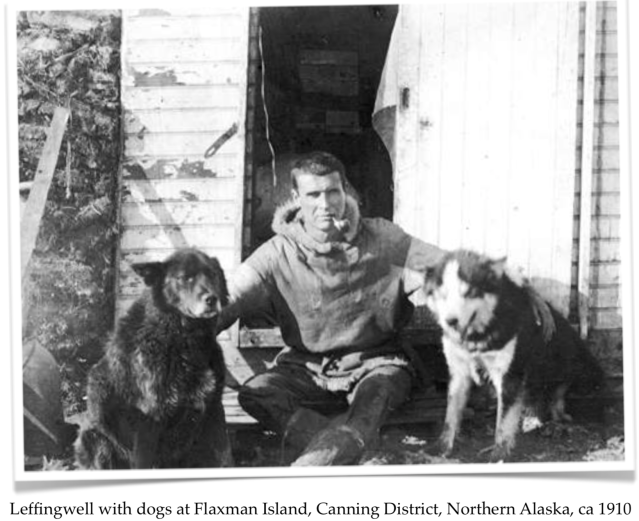 Ernest de Koven Leffingwell was a joint commander, with Ejnar Mikkelsen, of the 1906-1908 Anglo-American Polar Expedition, which established that, contrary to long-held myths and stories, there was no land north of Alaska.

Self-described as “the forgotten explorer,” as his efforts went largely unrecognized in his own time, Leffingwell is credited for later mapping about 150 miles of the Arctic coastline, between Point Barrow and Herschel Island, along with the adjacent Brooks Range, between 1906 and 1914. 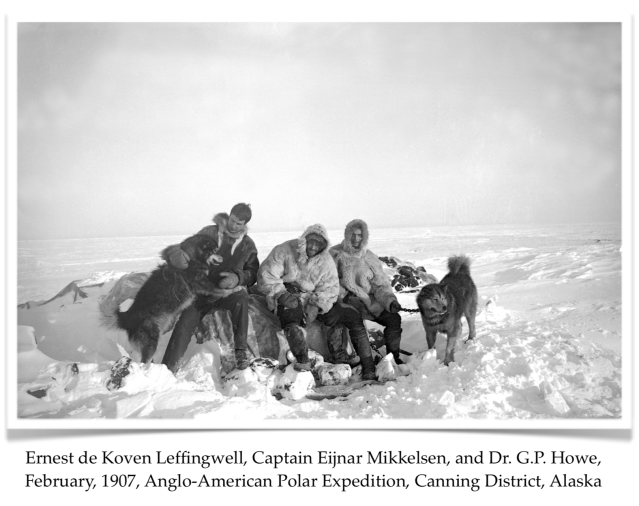 Leffingwell, Mikkelsen, and the members of their expedition became stranded on the coast of the Arctic Ocean when their schooner, the Duchess of Bedford, became ice-locked near Flaxman Island, 250 miles east of Pt. Barrow, the northernmost point of Alaska. While Leffingwell, Mikkelsen, and the ship’s physician, Dr. G.P. Howe, were exploring the coastline in March and April, 1907, the sailors in the expedition used wood from their badly-damaged ship to build a rough but serviceable cabin and other structures on Flaxman Island. For the next several years, Leffingwell stayed at the camp intermittently and conducted mapping projects with Inupiat guides, traveling by dog team in the winter and following the coastline in a small boat during the summer months

Leffingwell’s cabin and several other buildings on Flaxman Island still stand, and a sign was placed on them in 1971 by geologist C. G. Mull for the Alaska Division of Parks which states: “From this base camp geologist Ernest D.K. Leffingwell almost singlehandedly mapped Alaska’s Arctic coast during the years 1907-1914. He also identified the Sadlerochit – main reservoir of the Prudhoe Bay field.” In 1978 Leffingwell’s camp was listed as a National Historic Landmark. 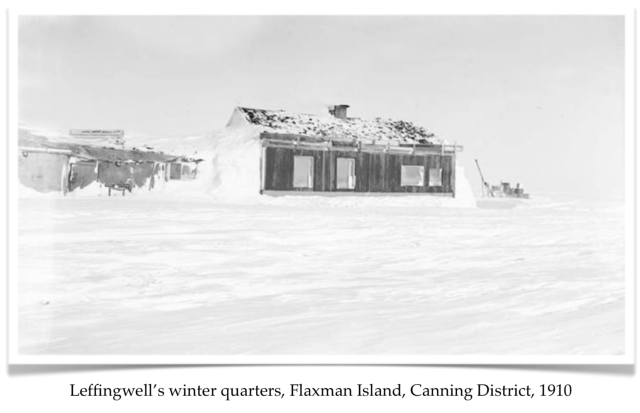 Leffingwell’s writings include many original journals and related papers from his expeditions. In 1909 he contributed to a book, Conquering the Arctic Ice, authored by his friend and expedition co-commander, Ejnar Mikkelsen (Philadelphia: G. W. Jacobs); in 1915 he wrote an article, “A Communication from Leffingwell,” for the University of Chicago Magazine; and in 1919 he authored a 247-page Professional Paper on the Canning River Region for the U.S. Geological Survey.

In Conquering the Arctic Ice Mikkelsen described buying dogs for the two-month exploratory expedition which he, Leffingwell, and Dr. Howe undertook in the spring of 1907: “Another serious question to be settled was that of the dogs, as several more of our pack had died, and some of those we had bought were useless. We had to get more and were willing to pay any price for them. We began at once to look about us for dogs in the possession of the Eskimos which we knew would stand us in good stead for the ones lost, but we had to pay exorbitant prices for them. For example, one which we bought from Kanara was paid for with two sacks of flour, 25 lbs. beans, 6 lbs. coffee, 20 lbs. dried potatoes, 12 lbs. cocoa, one shot-gun, 250 rounds of ammunition, and one broken-down tent; and another bought from Uxra with two sacks of flour, one sack of cornmeal, 5 lbs. coffee, 20 lbs. dried potatoes, 25 lbs. sugar, 4 lbs. prunes, 4 lbs. malted milk, 200 rounds of cartridges, and one hatchet file. The prices, as said above, were exorbitant, but the dogs were good, and what was more, we needed them.”

Joe Henderson is a dog musher and arctic traveler who has explored the remote regions of Alaska over the past 30 years with his intrepid team of twenty-two Alaskan Malamutes. During the winters of 2006-2008, Joe and his Malamutes made a series of unprecedented solo expeditions in the Brooks Range and the Arctic National Wildlife Refuge. Pulling three sleds in tandem with two tons of supplies, Joe and the team mushed entirely unsupported for up to five months at a time without seeing another human being. 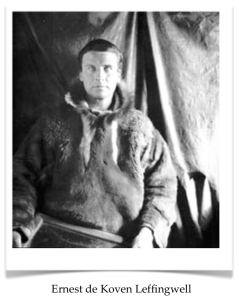 Henderson’s expedition was a tribute to the “forgotten explorer,” Ernest de Koven Leffingwell. Traveling with Leffingwell’s journals as a guide, Joe covered much of the same country, camped in many of the same localities, and experienced some of the same weather and ground conditions that Leffingwell had a century before. On the third year of the expedition, Joe found Leffingwell’s cabin during a whiteout blizzard.

Joe kept a detailed journal of his travels, and he wrote a three-part series of articles for Mushing magazine which appeared in three issues from 2006 to 2008. An excerpt: “It always amazes me how much ground Leffingwell covered. Leffingwell, along with some local Inupiat assistants, had spent six winters and nine summers surveying, mapping and studying Alaska’s arctic environment. He traveled by dogteam or small boat over 4,500 miles, drew a sketch map of the entire coast between Point Barrow and the Canadian border, triangulated 150 miles of coast, and mapped the geographic features of 4,000 square miles of mainland. He also named several geologic formations, including the one that is the source of oil at the Prudhoe Bay oilfield. He journeyed 20,000 miles by ship, and he mentioned pitching camp 380 times! These are just a few of his extraordinary accomplishments.” [Joe Henderson, Retracing Leffingwell, Mushing Magazine, Nov/Dec, 2008]

Also available for $5.99 as a Kindle eBook from Amazon.