In 1974, the second year the 1,049-mile Iditarod Trail Sled Dog Race was run, Mary Shields became the first woman to finish the race, with the smallest team in the race (only eight dogs) and a part-Labrador lead dog named Cabbage. In her 1984 book, Sled Dog Trails (Alaska Northwest Publishing Co.), Mary explained how Cabbage got his name, as she described taking the train from her home beside the tracks to Talkeetna and finding homes for a box of puppies: “Within 24 hours I found homes for five of the pups. I returned home on the next day’s northbound, carrying just one fat black pup curled in the expanse of his previously crowded box. I called him Cabbage because he was so round and silly looking. His future owner could give him a reasonable name, but Cabbage would do until that time came.” 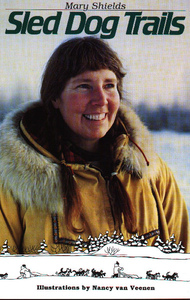 The little black pup accompanied Mary to Mt. McKinley National Park (as it was known then), where she was planning to go backpacking before taking on a summer job. A Park Service ranger asked about the pup, saying they’d been looking for some new blood at the park’s kennels. But when Mary returned from her backpacking the ranger returned the little fellow, sadly explaining “…the tourists expect our dogs to look like malemutes.”

So little Cabbage stayed with Mary, and she and her team not only ran the Iditarod, but also ran in the Yukon Quest International Sled Dog Race and the Hope Race from Alaska to Siberia. But even more than competition, Mary enjoyed the freedom and pleasure of long trips with her dog team, exploring the wild country and meeting the people who live in the bush communities of Alaska. “Over the winter, the country taught me many lessons. Being by myself, I had time to watch and listen. I heard the singing of my own heart, the joys, the fears, the questions, the unanswerables. A peace filled me and gave me strength I had not known before.”

In Sled Dog Trails Mary opens with a quote from a poem by Robert Service, and she ends her book with another, “…the freshness, the freedom, the farness…” familiar to lovers of the far north. She explains: “‘The freedom’ was the decision to take my time; to make the day, the seasons, the years full of meaning. Understanding the country from the back of a dog sled gave me a comfortable feeling of being at home in the wilderness.” 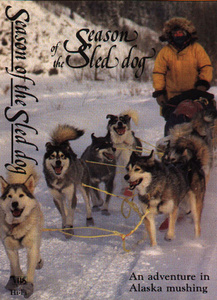 Mary has written five books, and she was the subject of a PBS feature video, Season of the Sled Dog, which shares Mary’s Alaskan lifestyle, celebrating the huskies in their everyday life, on the long race, and on a spring trip. Besides Sled Dog Trails, Mary’s books include Small Wonders: Year-Round Alaska, which is Mary’s journal sharing nature’s cycles and the quiet life in a cabin in the Alaskan woods (featured on Will Curtis’ “The Nature of Things” on NPR), and her books for younger readers include What’s a Shrew to You?, a rhyming picture book illustrated by Jon Van Zyle, and the international award winner, The Alaskan Happy Dog Trilogy.

If you’re visiting Fairbanks be sure to plan a trip to Mary’s kennel for her ‘Alaskan Tails of the Trail‘ tour, which she describes at her website. After a stroll through her vegetable and flower garden, you’ll meet her family of huskies, big freighting dogs, and then, as Mary explains, “After you see a winter camp, and learn how I fell in love with sled dogs way back in 1969, we’ll go in the cabin and have some refreshments. After getting comfortable around the kitchen table I’ll compare the Yukon Quest and the Iditarod, and share with you how I felt to cross the finish line as the first woman to ever complete the race. Then, I’ll recount the greatest adventure of my life so far—the 1,200-mile Hope ’91 journey through Siberia.”

All of Mary Shields’ books, and her video, can be ordered directly from her at Pyrola Publishing.