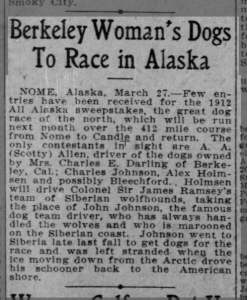 An old friend, Robert Lutz, sent me the link to an article which appeared in the March 27, 1912 issue of the newspaper, The San Francisco Call, which noted entries for the 1912 All Alaska Sweepstakes race. The article read, in full:

NOME, Alaska, March 27.—Few entries have been received for the 1912 All Alaska sweepstakes, the great dog race of the north, which will be run next month over the 412 mile course from Nome to Candle and return. The only contestants in sight are A A. (Scotty) Allen, driver of the dogs owned by Mrs. Charles E. Darling of Berkeley, Cal.; Charles Johnson, Alex Holmsen and possibly Bleechford. Holmsen will drive Colonel Sir James Ramsey’s team of Siberian wolfhounds, taking the place of John Johnson, the famous dog team driver, who has always handled the wolves and who is marooned on the Siberian coast. Johnson went to Siberia late last fall to get dogs for the race and was left stranded when the ice moving down from the Arctic drove his schooner back to the American shore. 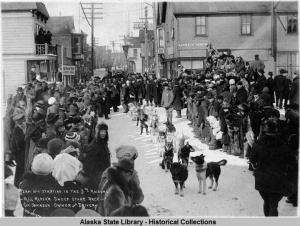 I have written about the All Alaska Sweepstakes race many times, most recently in my newest book, Alaskan Sled Dog Tales. In that book I included an article about the great racer, John “Iron Man” Johnson, who is mentioned in the 1912 article. I also included a booklet written by Mrs. Charles E. Darling, also known as Esther Birdsall Darling, the author of the classic children’s book, Baldy of Nome. That booklet, The Dog Races of Nome, detailed the results of the fifth All Alaska Sweepstakes race in 1912: 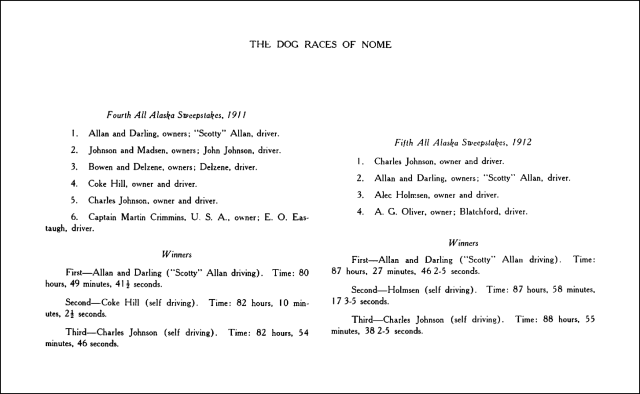