In 1910, a Scottish nobleman who lived in Nome, Fox Maule Ramsey, crossing the Bering Strait to Siberia and purchased 70 Siberian racing huskies. In that year’s All Alaska Sweepstakes race, a 408-mile run from Nome to Candle and return, Ramsay’s dogs won 1st, 2nd and 4th places, with the first place team driven John “Iron Man” Johnson with his peerless lead dog Kolyma setting the pace. Named for the great Kolyma River in northeastern Siberia, the striking black-and-white blue-eyed Siberian husky was Johnson’s favorite, and his constant companion. 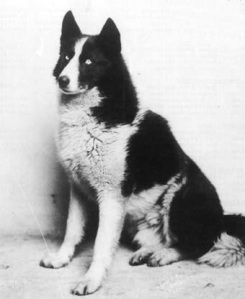 At one point in the race, crossing the aptly-named “Death Valley,” Johnson became snow-blind, strapped himself to his dogsled, and relied on Kolyma to keep the team on the trail. Upon winning the race Johnson was given a traditional victory wreath, but he took it off and placed the wreath on Kolyma, saying, “I did not win the race, this leader won it!”

John “Iron Man” Johnson was a musher of great renown in early Alaska, having won the 1910 All Alaska Sweepstakes race with an elapsed time of 74 hours, 14 minutes, 37 seconds, setting a record which would not be broken until the Centennial running in 2008, at a time when dogs were better bred, better fed, and better cared for on the trail.

San Francisco, Cal., Jan. 9, 1915 – John Johnson, “The Iron Man of Alaska,” and his pack of $30,000 Siberian wolf dogs, winners of the All Alaska Sweepstakes race, have come down here to loaf a little while in the land of soft delights. With Johnson is Bill Brady, another celebrity of the “land that God forgot,” and his string of huskies, valued at $20,000.

John and Bill and their shaggy canine friends were a little shy and awkward when they tromped down the gangplank at the wharf here. Asphalt streets and skyscrapers were strange to feet and eyes accustomed to snows and the long, hard trails.

Lean and hard they were, both men and dogs, their bodies stripped to the fighting weight of bare muscle and sinew the Northland demands of its creatures. An extra pound of flesh may weigh like a ton in the strenuous sport. Johnson does not sleep. Only a few mouthfuls of food pass his lips, and scarcely any water. The dogs run the grueling race under the same conditions. In 1910 when he won his first Sweepstakes, John Johnson did not once stop to rest. This year he allowed himself a few minutes in breathing spells, finding that the short pauses benefitted him and his dogs. The man who can do that is quite naturally the idol of his fellows on the other side of ’53.

The dogs, too, come in for their share of worship–Those who live to drag themselves to the winning post. The drivers in the All-Alaska race, inaugurated by the Nome Kennel Club in 1908, may go as they please. The only condition is that they bring in every dog, dead or alive, with which they started. In one of his races Johnson finished in spectacular fashion with three exhausted dogs and one dead on his sled.

With leaders Kolyma and Jodi

His record for the 408-mile course never beaten is 74 hours and 14 minutes, which is remarkable time when the rough country over which the trail leads is considered. On the way Johnson feeds his wolf hounds biscuits made of graham flour, eggs, cream and sugar, only small portions being doled out to sustain their fires of endurance.

“You can’t get over the country on a full stomach,” explained the greatest of northern dog mushers.

While in San Francisco, where Johnson and Brady expect to stage Alaskan dog-racing scenes at the 1915 exposition, the $50,000 beauties will be fed on a fish diet until they get accustomed to the rations of bread, milk, and biscuit it is intended to substitute after a time.

This is Johnson’s first visit to San Francisco in 10 years. Formerly he often made this port as a sailor, having graduated from the foc’scle to champion dog driver a decade ago. 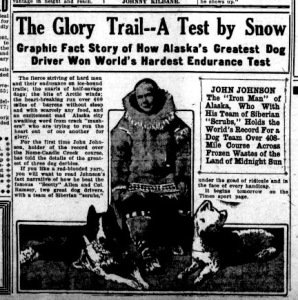 Lake Tahoe’s Winter Carnivals were much-anticipated and popular events in the early 1900’s, and while dog sledding and racing began during winter carnivals in the late 1890’s, the first and official sled dog race in the continental U.S. was reportedly held in Truckee, California, in 1915. Bert Cassidy, editor of the Truckee Republican (Sierra Sun), described the event: “Crowds of people had been arriving in Truckee on each train… all hotel accommodations had long since been taken… movie cameramen were legion… all the bigger papers had sent sports editors.”

After arriving in Seattle  with his dog team during the latter part of 1914, John Johnson traveled to San Francisco to enter some races and display his dogs at various shows.  He and his team entered the race in Truckee, and were billed as an All Alaska Sweepstakes champion team of “Siberian Wolf Dogs” competing against a team of “Huskies” driven by Ed Parker, and a team of Malamutes driven by Bill Brady.

Johnson was photographed with the famed novelist Jack London, a spectator at the event who would return to the area twenty years later for the filming of the movie version of his book, The Call of the Wild. While at Truckee, Johnson and his dogteam would be  featured in a movie titled “The Deathlock,” a silent film by the Mutual Film Corp. starring Fred J. Butler, Wilma Wilkie, and David W. Butler in a story of Alaskan prospecting, gambling, claim jumping, and of course, romance.

A Swedish Finn who was born in Åbo, Finland in 1871, John “Iron Man” Johnson never raced again after the 1914 All Alaska Sweepstakes, except for the short exhibition race in Truckee, California in January, 1915 (he won it.) He later became a deckhand on a trading ship plying the Bering Sea waters. In the 1920 census for Nome, Alaska, John Johnson’s age was given as 48, his home was listed as Cape Nome, and his occupation as a seaman – coastwise. 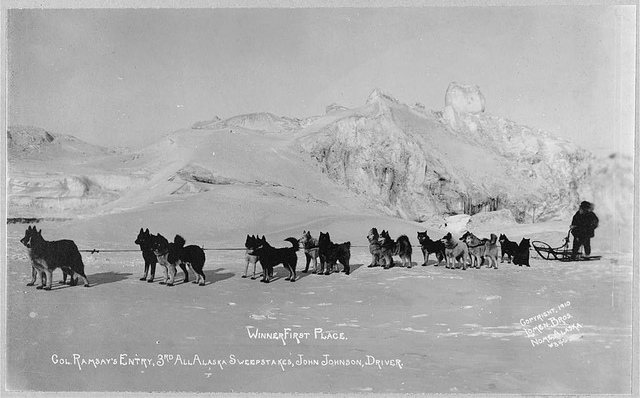 This article is excerpted from Alaskan Sled Dog Tales, by Helen Hegener, published in May, 2016 by Northern Light Media.