The history of Alaska was in large part written behind a team of sled dogs.

“These trustworthy creatures could be relied upon to do the heavy work, while remaining—as Hegener eloquently reminds us—our most treasured friends.” David Fox, for the Anchorage Press

Alaskan Sled Dog Tales shares the important history of sled dogs in Alaska and how they were an integral part of events such as the 1925 Serum Run to Nome, explorations of the land before there were roads or railroads, and tells of the thrilling adventures of legendary mushers such as Leonhard Seppala, Scotty Allan, ‘Iron Man” Johnson and many others. These stories, however, are not just tales of the well-known and heroic mushers, but also of lesser-known dog drivers whose day-to-day lives were spent on the trails, behind a team of trusted sled dogs. 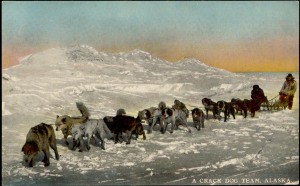 Dozens of old photographs and postcards are included, along with the entire booklet published by Esther Birdsall Darling in 1916, titled The Great Dog Races of Nome, which details the first eight years of the All Alaska Sweepstakes race, from 1908 to 1916.

“Relying upon material written from the late 1890s through the early ‘30s, [Hegener] catalogues how sled dogs provided Alaskan residents the ability to traverse enormous distances, deliver critical supplies and maintain communication from within and outside Alaska. The episodes she recounts are stirring, filled with human and animal bravery. Some are simply mind-boggling, filling the reader with awe and enormous respect for dog and driver alike.” David Fox, in the Anchorage Press