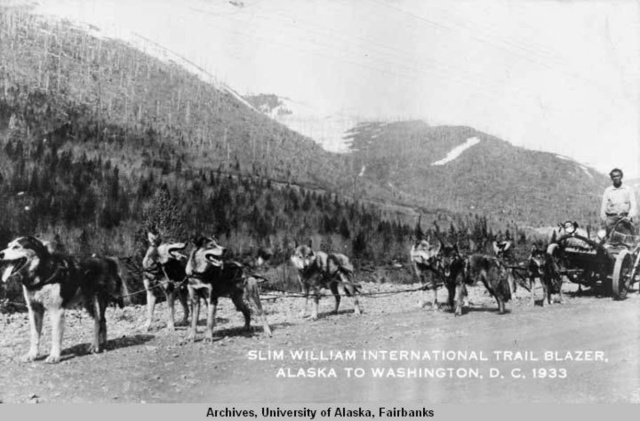 While his trip was sponsored by The International Highway Association of Alaska and the Yukon Territory, Williams still sold postcards such as this along his route. [Slim Williams Papers, UAF-207-59-17 University of Alaska Fairbanks]

Clyde “Slim” Williams arrived in Alaska in 1900 at the age of 18 and spent the next thirty years trapping, hunting, and blazing trails throughout the frontier. In the early 1930’s Williams became a strong proponent of the plan for a highway linking Alaska to the lower 48 states, and he boasted that he could drive his dog team along the proposed route and continue all the way to Chicago, Illinois, where the 1933 Century of Progress Exposition was planned as part of the World’s Fair, celebrating man’s innovations in architecture, science, technology and transportation. The Alaska Road Commissioner, Donald MacDonald, persuaded Williams that such a trip could be used to promote the building of an Alaska highway, and so in 1933 Slim traveled down the proposed route by dogsled, using only crude maps in what was previously unmapped territory. 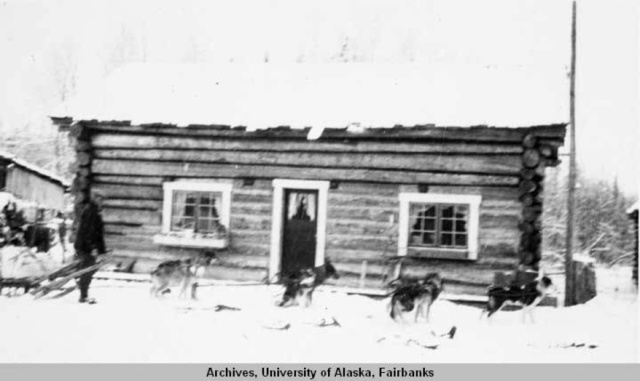 Leaving the White Roadhouse on Indian River on the way to U.S., 1933 [Slim Williams Papers UAF-2007-59-11 University of Alaska Fairbanks]

An article for the Uniontown News Standard reported on December 11, 1933, “He started from Copper Center, November 20, 1932, without stove, tent or compass and with only the stars, the trees and the sun to guide him. His route carried him through Dawson City, White Horse, Atlin and Telegraph Creek and after covering 1800 miles through the wildest sections of Alaska and British Columbia he reached civilization at Hazelton, B.C. On sections of this trip he traveled as far as 500 miles without seeing one human being. Cooking over an open fire and sleeping in his sled were part of the journey which was tinged with tragedy when the wolves along Forty Mile river killed one of his favorite dogs.” 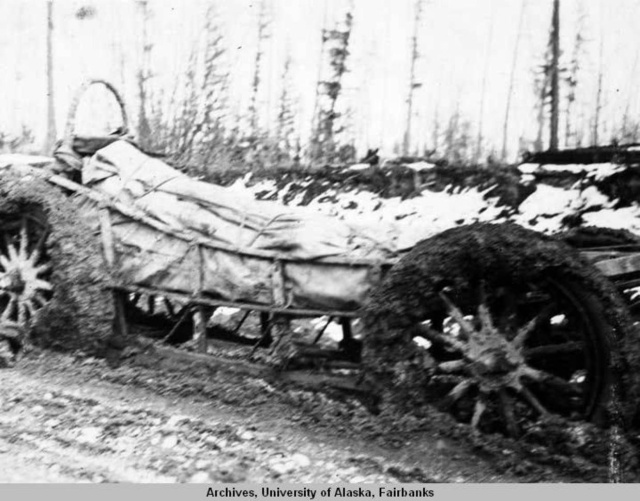 It took Williams five months to reach the end of the then-existing highway system near Hazelton, British Columbia. When spring thawing made sledding impossible, he mounted four Model T Ford wheels on his dogsled in Smithers, B.C. and continued toward the Chicago World’s Fair. By the time he reached Seattle, Williams and his wolf-dog team had become celebrities. Articles about his overland trek appeared in Time magazine, The Washington Post, The Christian Science Monitor and many others. 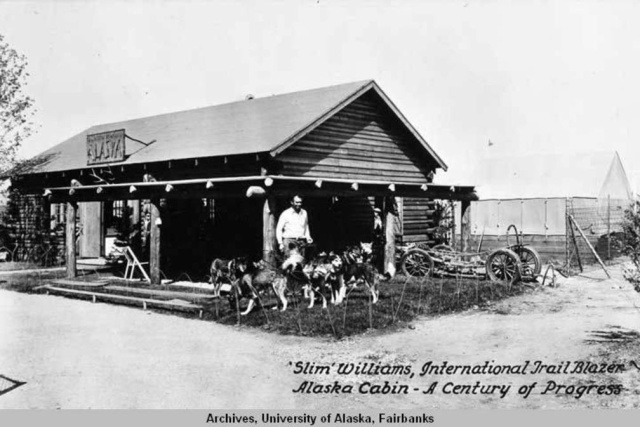 Slim with his team at the Chicago Century of Progress Exposition, 1933 [Slim Williams Papers UAF-2007-59-5 University of Alaska Fairbanks]

In Chicago, Williams and his dogteam made a popular Alaskan exhibit at the Century of Progress Exposition. A Time magazine article (October 2, 1933) reported that when former President Herbert Hoover visited the fair he chatted with Williams, and First Lady Eleanor Roosevelt described her meeting with Slim Williams as the most enjoyable part of her visit. A lecture brochure noted: “upon returning to Washington she told newsmen that what she liked best was a tall young man with blue eyes that looked miles away, who had driven his dog team all the way from Alaska.” 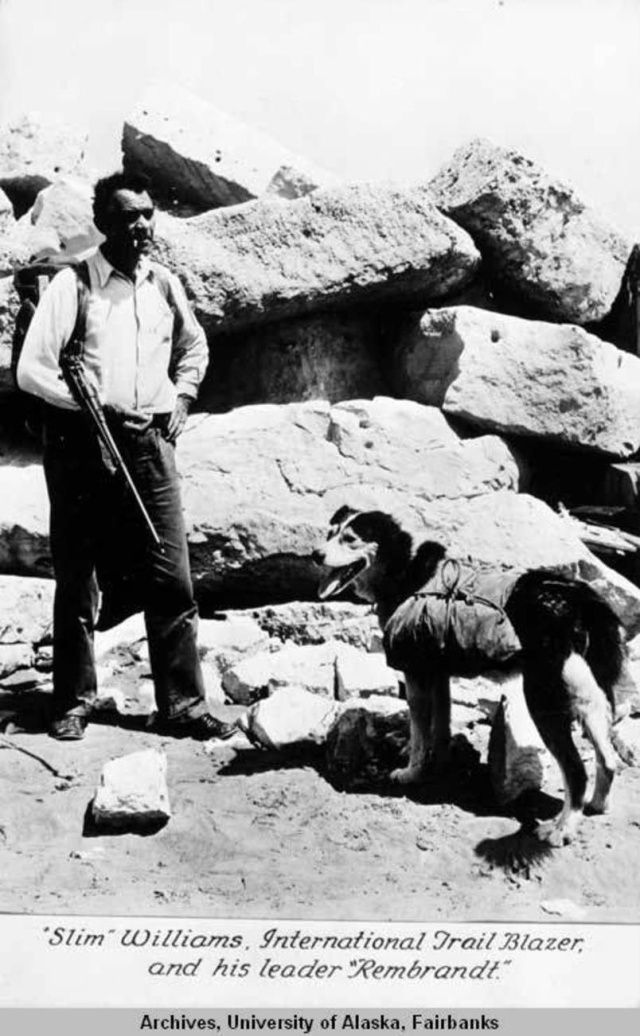 Slim Williams with his leader “Rembrandt.” When asked about his name Slim replied, “Well, isn’t he a picture?” [Slim Williams Papers UAF-2007-59-16 Univ of AK Fairbanks]

After the World’s Fair closed for the season, Slim and his team of half-bred wolf/dogs proceeded to Washington, D.C., bringing the total distance of his journey by dogteam to over 5,600 miles. He camped in a city park and spent the winter discussing Alaskan concerns with legislators, and even met with President Franklin Roosevelt to further promote the highway. Williams enjoyed a dinner with the President and the First Lady, still advocating for the proposed road. The President finally did set up a commission with Canada to explore building a highway to Alaska, but while the project was considered feasible it was deemed too costly and unnecessary at that time.
Later in life, Slim traveled around the country with his wife doing presentations and slideshows, and he enjoyed success as a popular lecturer, as described in the text of a lecture brochure: “The Adventurers Club of Chicago, where all famous explorers speak, say his talk is one of the most fascinating and thrilling they’ve had in years.”
In 1956 an authorized biography of Slim Williams’ adventures was published by Richard Morenus: Alaska Sourdough: The Story of Slim Williams. The book detailed Slim’s 1933 solo dogsled adventure, and also his 1939 trip from Fairbanks to Seattle by motorcycle with 25-year-old John Logan. Their goal was the New York World’s Fair, and just as with Slim’s 1933 trip, the purpose was to gain publicity for the need to build a road connecting Alaska to the rest of the United States. At that time, there still wasn’t even a crude trail to follow for over 1,000 miles of the journey, so the adventurers crossed the wide rivers and daunting mountains in whatever manner they could, and their much-publicized journey once again spotlighted Alaska’s need for a road to the 48 states.
In early 1942, when World War II made an overland route necessary, President Roosevelt signed the authorization, and on November 20, 1942, at Soldier’s Summit near  Kluane Lake, a ceremony marked completion of the first phase of construction. Today the road is a major artery to the north, and the Alaska Highway project is still heralded as one of the greatest engineering feats of the twentieth century.   ~•~