The Huskies and the Reindeer

From 2009 through 2013 the twice-weekly Team & Trail column, written by Northern Light Media’s Helen Hegener, ran in the online newsmagazine Alaska Dispatch, and featured news of interest to the mushing community, including sled dog race reports, news, photos, articles, history, personality profiles, book reviews, and much more.The articles about the personalities and the history of mushing were particularly interesting, and over the coming weeks I will be presenting some of them for our new readers, starting with this gem from December, 2009:

“I spent almost the entire winter freighting with my dogs to the outlying creeks, and so was away from civilization most of the time. There was more money in it than in ordinary freighting to the mines, and the life suited me better. I had to camp out, but this was less difficult now than formerly, as by this time we all had tents and stoves.”
— Arthur Treadwell Walden, “A Dog-Puncher on the Yukon” (Houghton Mifflin Co., 1928) 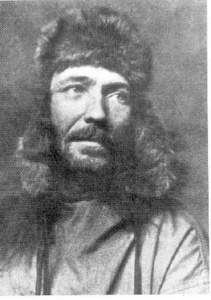 Archdeacon of the Yukon Hudson Stuck

The colorful history of sled dog travel has been well documented over the years, in books ranging from the classic “Gold, Men and Dogs,” by A.A. Scotty Allen (G.P. Putnam Sons, 1931), to Archdeacon of the Yukon Hudson Stuck’s “Ten Thousand Miles with a Dogsled” (1914). But one of the most compelling books ever written about sled dog travel in the north country is a newer title, published in 2003 by W.W. Norton & Company.

“The Cruelest Miles: The Heroic Story of Dogs and Men in a Race Against an Epidemic,” by cousins Gay Salisbury and Laney Salisbury, details the heroic relay dash of 20 men and more than 200 dogs who raced across 674 miles of Alaskan backcountry to deliver lifesaving serum and save the citizens of Nome from a diphtheria outbreak. The book includes some wonderful history of our state, and at one point the Salisbury cousins noted the central role of sled dogs in the history and development of the territory of Alaska: “…It was dogs and dog traction, for centuries the mainstay of Eskimo survival, that made this new world run. During the gold rushes, dogs brought the modern world to Alaska, hauling food, mining supplies, medicine, passengers, and gold across the network of rivers and trails that Eskimos and Athabaskans had been following for hundreds of years.” 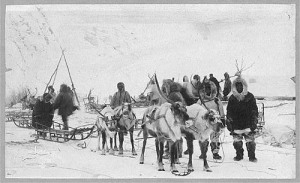 Then, in the next paragraph, the Salisburys report a little-known aspect of Alaskan history: “In addition to trade goods, the gold rush brought some strange ideas to Alaska, and the most bizarre may have been the belief of some U.S. government officials that Alaskans would be better off living in Alaska without dogs. Ambitious entrepreneurs tried many alternative forms of transportation and communication that they hoped would be superior to dogs, including horses, goats, hot-air balloons, bicycles, ice skates, ice boats, ice trains. and passenger pigeons. But the favorite choice of several key officials was the reindeer.”

Incredibly, the primary proponent for reindeer was Dr. Sheldon Jackson, a Presbyterian minister and the head of Alaska’s fledgling education system at the turn of the century. A staunch supporter of reindeer who argued their qualities far and wide, Jackson even testified before Congress that dogs were treacherous and unreliable beasts, and claimed that they “require considerable food for their support, while reindeer are gentle, timid and eat little, foraging on the moss and spruce of the tundra.”

Fortunately for our canine friends, the aforementioned Archdeacon Hudson Stuck challenged Jackson’s assertions. He’d written compellingly in “Ten Thousand Miles With a Dogsled” that the husky dog was prized and called “the Friend of Man,” and he observed “There is not a dog the less in Alaska because of the reindeer, nor ever will be…” When the Canadian government introduced reindeer into Labrador under the direction of Dr. Wilfred Grenfell, who stated his hope they would “eliminate that scourge of the country, the husky dog,” the Archdeacon Stuck responded, “Instead of the reindeer eliminating the dog, there is far greater likelihood of the dog eliminating the reindeer…”

After a few side paragraphs on feeding and caring for reindeer as opposed to dogs, the Archdeacon went on, warming to the argument: “Speaking broadly, the reindeer is a stupid, unwieldy, and intractable brute, not comparing for a moment with the dog in intelligence or adaptability.” He did, however, admit to the reindeer’s usefulness in one regard: “Wherein lies the success of the reindeer experiment in Alaska? Chiefly in the provision of a regular meat supply…”

• History of Reindeer in Alaska, University of Alaska Fairbanks Newsroom