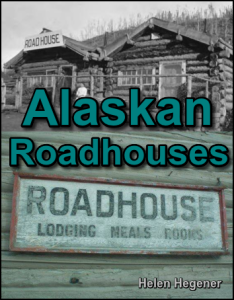 My current writing project is a book chronicling the old roadhouses of Alaska, and I’ve been sharing progress reports at a site I created for the book which is titled, as the book will probably be titled, Alaskan Roadhouses. From the earliest tent-style roadhouses to today’s picturesque roadside lodges, Alaskan roadhouses are a colorful reminder of the state’s past, and many are still an important part of Alaska’s transportation network. With this new book I plan to share the history of these iconic Alaskan structures. 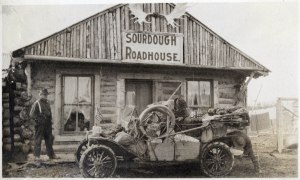 As I wrote in a post at the site last week, there is really “no way a complete compilation would ever be possible, as the vagaries of time have swallowed up numerous once notable roadhouses. Trails have been shifted and moved by rivers changing course, or by men doing the same, and the roadhouses have shifted and moved with them. Locations have been reported for many years which eventually proved to be wrong, confusing historians and those who would record the often very sparse details.”

This book won’t be an easy one to research and write, but when it is finished I hope it will prove to be a worthwhile addition to the colorful history of our great state.