Lance Mackey is one of the greatest dog drivers of all time. Four-time Yukon Quest Champion. Four-time Iditarod Champion. Winner of the Humanitarian Award for excellence in sled dog care for both races, winner of numerous awards  over the years in dozens of races. Twice nominated for ESPN’s prestigious Excellence in Sports Performance Award. A true dogman. The Dogfather.

Greg Kohs is an accomplished filmmaker. Winner of ten Emmy Awards®, he has produced films and commercials for clients such as Google, Apple, Nike, Mastercard, Disney, and others. His feature films include the award-winning Song Sung Blue, described by the late Roger Ebert as “Superb.” His films have been described as “strong stories with visually beautiful and honest imagery,” and “about people who pursue their own passions in life.” 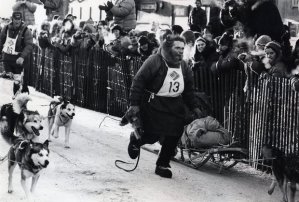 The combination of Lance Mackey’s life story and Greg Kohs’ filmmaking talents has resulted in a spectacular film, The Great Alone, which seizes the audience right from the opening scene. It’s a brilliant moment: A gray-haired man works out on a treadmill while an excited radio announcer describes the finish of a sled dog race. Those familiar with the history will recognize 1978 Iditarod Champion Dick Mackey listening to the closest-ever finish in Nome, when he beat Rick Swenson by one second and then collapsed on top of his sled in exhaustion. The film moves to old footage of the moment, and standing beside Dick are his sons, 7-year-old Lance and 6-year-old Jason, wide-eyed and taking it all in.

Lance Mackey and his father

Without so much as a mention of Lance’s own historic achievements, the film begins telling the story of the two young boys. They lived a hardscrabble Alaskan childhood; when their parents separated their tough-as-nails mom made sure dogs remained a part of their life, and sled dog races assured they would grow up to be mushers like their dad. That part of the film is hard to watch, as Kohs lays bare the heartache and anguish of a broken family; the hurt, pain, and unanswered questions.

The years go by, the young boys grow up. Lance becomes a commercial fisherman in the Bering Sea, and he admits of cowering behind the wheelhouse after a fearsome storm in fear for his life, certain he’s going to die and swearing never again if he makes it back to port. But then he collects $5,500 for a month’s work and smiles… The money and the lifestyle take him in what he only describes as a bad direction.

More years pass, Lance marries his high school sweetheart and they build a cabin on the Kenai Peninsula. The wedding photos of the couple, and the cabin they built with only a handsaw and backwoods ingenuity, are priceless. Lance begins collecting dogs.

The story moves back into familiar territory again. Lance starts entering and winning races, and eventually he enters the Big One, the Iditarod. Halfway to Nome he calls his mom to tell her things are going wonderfully! And then, three-quarters of the way to Nome he calls her again; something is wrong. Once again the film becomes difficult to watch, as Lance talks candidly about the cancer. When he tells of the moment when he realized that he might not make it out of surgery, that he could be saying goodbye to his family for the last time, the emotional tension is palpable. There’s simply no way to watch it without a lump in your throat.

Lance survives, of course, and the underlying thread of the film, the 2013 Iditarod, continues, checkpoint by checkpoint. Lance’s life story continues as well, and he wins the 2007 Iditarod. It’s another emotionally-charged moment as his brother Jason grabs him in a great bearhug and Lance tells him “Life just changed!” He tells his mother “Dreams DO come true!” and when his father, arriving late, steps onstage at the mini-convention center it’s a moment we know Lance has waited his whole life for. His father is proud of him.

Lance’s 2007 win was tempered by many of his mushing peers saying it was a fluke, he got lucky, it would never happen again, and that sets up a wonderful moment in the film when Lance talks about their negative attitudes and then resolutely states, “Watch this!”

The Great Alone premiered in Anchorage on March 4. It’s scheduled to show in Fairbanks on March 8. For future news and updates about the film follow the Facebook page or Lance Mackey’s Comeback Kennel website.

7 Responses to The Great Alone