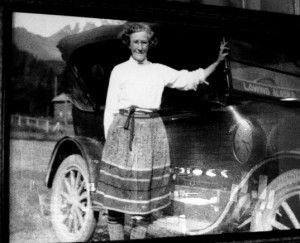 Dave Folk of Talkeetna is raising money for a new headstone for Nellie. See the end of this article for information and please help Dave!

Nellie Neal Lawing, familiar to Alaskans as “Alaska Nellie,” lived a life much larger than most, even by Alaskan standards. She was a fisherman, a hunter, a trapper, a cook and a roadhouse keeper; she fed the crews building the Alaska Railroad, welcomed princes and presidents into her home, guided big game hunters and developed an impressive trophy collection of her own. She mushed a dog team, kept a pet bear cub, became famous for her strawberry pies, and saw a movie made about her adventures. She was one of a kind, an Alaskan original, and she lived life to the fullest. 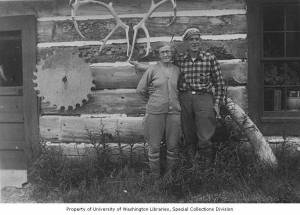 Bill and Nellie Lawing at their cabin beside Kenai Lake.

Her happiest days were spent with the love of her life, Bill Lawing, in their log cabin on the shores of beautiful Kenai Lake. She mentions it in the opening paragraph of her autobiography, ‘Alaska Nellie’:

“Glancing out through an open window of a large log home on the shores of Kenai Lake at Lawing, Alaska, the rippling waves had become glittering jewels in the full moonlight of a summer’s night. 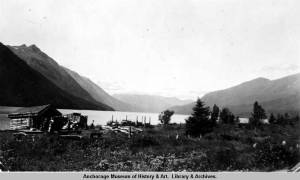 Mountains covered with evergreen trees and crowned with snow were reflected in the mirror-like water of Kenai Lake. Was I dreaming, or was the curtain of the past rolling up, so that I might glance back over twenty-four years spent in the great North-land and say, ‘No regrets.'”

Nellie’s early life is succinctly described in an article which was written by Lezlie Murray, Visitor Services Director, Chugach National Forest, and published in Fall 2011 issue of SourDough Notes: 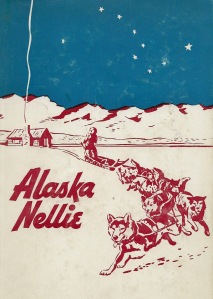 “The oldest of 12 children, Nellie Trosper was born into a farm family in Saint Joseph, Mo., where she dreamed of coming to Alaska. As a young child she learned to trap and hunt in the countryside around her parent’s farm, becoming a good shot and capable woods woman. She left home in her late twenties after she had helped to raise her brothers and sisters and could be spared. A diminutive woman barely five feet tall, Nellie began to work her way to Alaska in 1901, stair-stepping her way through the west. She spent the most time in Cripple Creek, Colorado, where she worked at a variety of jobs, owned her own hotel and married a prominent assayer. Unhappy in her marriage due to abuse at home, she made the decision to divorce and moved on to California, where she booked steerage to Seward, Alaska.”

“On my first time out on an Alaskan trail, I had walked one hundred fifty miles and as usual was alone. This accomplishment, in itself, might have satisfied some, but I was out here in this great new country to contribute something to others, and I felt this means could best be served by becoming the ‘Fred Harvey’ of the government railroad in Alaska.” 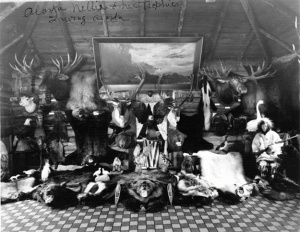 Likely due in part to her plucky approach, she was awarded a lucrative government contract to run a roadhouse at mile 44.9, a scenic location she promptly named Grandview. Her agreement with the Alaska Engineering Commission was to provide food and lodging for the government employees; her skill with a rifle filled out the menu, and her gifted storytelling kept her guests highly entertained. Nellie described the accommodations at Grandview in her book, ‘Alaska Nellie’:

“The house was small but comfortable. A large room with thirteen bunks, used as sleeping quarters for the men, was just above the dining room. A small room above the kitchen served as my quarters. To the rear of the building a stream of clear, cold water flowed down from the mountain and was piped into the kitchen. Nature was surely in a lavish mood when she created the beauty of the surroundings of this place. The timber-clad mountains, the flower-dotted valley, the irresistible charm of the continuous stretches of mountains and valleys was something in which to revel.”

Wiry and independent, Nellie was an excellent shot and a respected big game guide, and she rapidly accumulated an impressive array of wildlife trophies. She maintained a dog team in winter, and trapped along the corridor which would later become the Seward Highway. Once during a blizzard the local contract mail carrier, Henry Collman, didn’t arrive when he was expected, so Nellie hitched up her dog team and set out to find him. She located the mail carrier badly frozen in an area which had claimed several lives. Nellie took the young man back to her roadhouse to warm up, and then set off to finish delivering his mail sacks and pouches, which she later learned contained valuable goods, to the waiting train. For her courageous efforts the town of Seward declared her a hero and awarded her a gold nugget necklace, with a diamond set in its large pendant nugget. Nellie treasured her necklace to the end of her days. 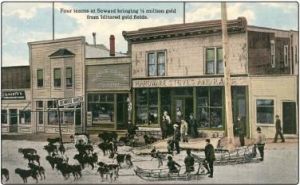 Nellie tells another dog team story in her book: “One cold winter day in December when the daylight was only a matter of minutes and the lamps were burning low, two U.S. marshals, Marshals Cavanaugh and Irwin, together with Jack Haley and Bob Griffiths, arrived at the roadhouse.

“The heavy wooden boxes they were removing from their sleds had been brought from the Iditarod mining district. They contained $750,000 in gold bullion.

“‘Where do you want to put this, Nellie?’ called the men, carrying their precious burden.

“‘Right here under the dining room table is as good a place as any,’ I answered.

And it was as simple as that. There it stayed until the men carried it back to the sleds, next day. They were able to go to sleep, for it was as safe right there in my dining room as it would have been in the United States Mint. No one would dare to touch it.” 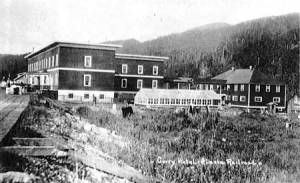 The Curry Hotel on the Alaska Railroad opened in 1923.

Nellie later operated a roadhouse near the Susitna River, at a railroad camp known as Curry, and then, in 1923, she bought her final home, a roadhouse on Kenai Lake. The railroad stop along the blue-green waters was renamed Lawing when Nellie Neal married Bill Lawing, and together they built the roadhouse into a popular tourist stop on the Alaska Railroad. Vegetables from Nellie’s garden were served with fresh fish from the lake or with game from the nearby hills, and Nellie’s stories, often embellished with her rollicking tall tales, kept her audiences delighted. Celebrities, politicians, tourists and even locals came to enjoy the purely Alaskan hospitality at the Lawings’ roadhouse on Kenai Lake. 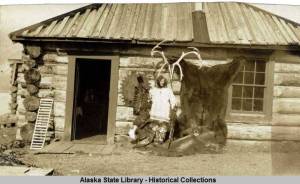 Alaska Nellie became known far and wide, and the foreword to a 2010 reprinting of her autobiographical book, “Alaska Nellie,” by Patricia A. Heim, sums up her legendary status:

“Nellie Neal Lawing was one of Alaska’s most charismatic, admired and famous pioneers. She was the first woman ever hired by the U.S. Government in Alaska in 1916. She was contracted to feed the hungry crews on the long awaited Alaska railroad connecting Seward to Anchorage. The conditions were harsh and supplies were limited. She delivered many of her meals by dogsled, fighting off moose attacks and hazards of the trail, often during below-zero blizzards. She always brought with her a great tale to tell of her adventures along the trail, how she had wrestled grizzlies, fought off wolves and moose, and caught the worlds largest salmon for their dinner, always in the old sourdough tradition. The workers listened and laughed with every bite.

“Nellie was an excellent cook, big game hunter, river guide, trail blazer, gold miner, and a great story-teller! It wasn’t long before Nellie became legendary and was known far and wide as the female ‘Davy Crockett’ of Alaska, her wilderness adventures and stories of survival on the trail spread like wildfire. Letters addressed simply ‘Nellie, Alaska’ were always delivered. 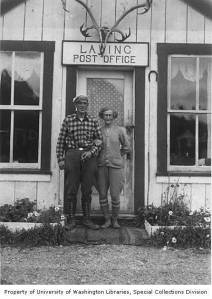 “Nellie finally established herself at “Lawing, Alaska” on Kenai Lake, and converted an old roadhouse into a museum for her multitude of big game trophies. It was a great railroad stop and the highlight of any Alaskan visit. Her guest register of over 15,000 read like the Who’s Who of the early twentieth century: two U.S. Presidents, the Prince of Bulgaria, Will Rogers, authors, generals and many silent-screen movie stars.

“Nellie would entertain them all. Colt pistol on her hip and a baby black bear by her side, Nellie was always ready with one of her outrageous tales of adventure. ‘I was just minding my own business on Kenai Lake when a huge grizzly showed up, I fired my Colt, but as luck would have it, somehow, it misfired, I then had to kick the heck out of the brute and he ran off, but before he ran off he bit me good, right on the wrist, see here.’ She would then fold back her sleeve to show a scarred arm.

“Nellie was so popular and loved that she was honored with an “Alaska Nellie Day” on January 21, 1956.”

A short movie clip, ‘Land of Alaska Nellie,’ was produced in 1940 by Metro-Goldwyn-Mayer Studios:

At the end of her foreword Patricia Heim added the following somber note: 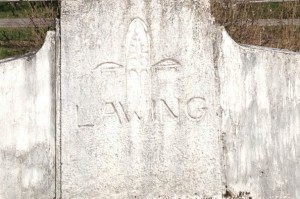 “Nellie is laid to rest in Seward, Alaska, where you can see Nellie’s gravestone which simply reads, ‘Lawing,’ unkempt, forgotten, unloved, with not a hint of the incredible little pioneer woman who lies beneath it. Every time I drive past the little dirt road which reads ‘Lawing’ I say to myself, ‘What a tragedy it is to have forgotten Alaska Nellie. What is left to remind us of the glorious days of the railroad roadhouse and the many lives that were so touched by Nellie?'” 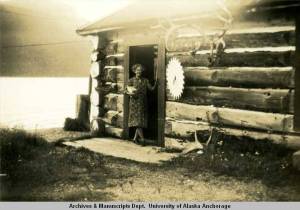 That same question was recently asked by Talkeetna resident Dave Folk, who created an online effort to raise money for a new headstone for Alaska Nellie. Dave wrote, “I found her headstone in grave need of help. It’s all but a crumbled mess and I have made it my mission to get her the notoriety she deserves…”

Please contribute to Nellie’s headstone project. This heroic and iconic Alaskan deserves to be remembered for her love of Alaska and the many lives she touched with her kindness, humor, and never-ending hospitality.

Interestingly, Alaska Nellie’s gravestone bears the image of a pineapple, a symbol of hospitality which began with the sea captains of New England, who sailed among the Caribbean Islands and returned bearing cargos of fruits, spices and rum. According to tradition in the Caribbean, the pineapple symbolized hospitality, and sea captains learned they were welcome if a pineapple was placed by the entrance to a village. At home, the captain would impale a pineapple on a post near his home to signal friends he’d returned safely from the sea, and would receive visits. As the tradition grew popular, innkeepers added the pineapple to their signs and advertisements, and the symbol for hospitality was further secured as needle-workers preserved the image in family heirlooms such as tablecloths, doilies, potholders, door knockers, curtain finials and more.