The 2013 Yukon Quest International Sled Dog Race is history, and mushing fans have already turned their attention to the Big One, the Iditarod, set to begin in Anchorage on March 2nd, with a Re-Start on Willow Lake the next day.

Many teams from the Yukon Quest trail will be going on to run the Iditarod, sometimes the same musher, sometimes another musher from the same kennel; and sometimes, as with first-place finisher Allen Moore and his handler/wife Aliy Zirkle, it will be both. Aliy, who won the Yukon Quest in 2000 and is still the only female YQ champion, finished second in last year’s Iditarod, and this year she and Allen will both be going for the Iditarod winner’s circle.

This year’s Yukon Quest, one of the mildest on record with above-zero temperatures for much of the race, kept fans on the edges of their seats right from the take-off in Whitehorse, and all the way to the finish in Fairbanks. The primary glory for the non-stop excitement rightly goes to the front-runners, Hugh Neff, Allen Moore, Brent Sass and Jake Berkowitz. Those four intrepid mushers set a blistering pace and kept race-watchers endlessly refreshing their tracker maps and asking each other, “how long can they keep this up?”

As it turned out, they kept it up all the way, setting a new race record* and adding some great ‘tales of the trail’ to the colorful lore of this legendary race.

Anyone who followed the race will long remember the winner, Allen Moore of SP Kennels, standing in the finish chute and casually asking, with his ever-charming smile, “So where’s everybody at?”

There was four-time champion Lance Mackey’s startling dropping of four dogs at the second checkpoint, and his subsequent scratching from the race. There was the surprising change of route deleting the often-treacherous American Summit… There was the totally dauntless Brent Sass slowly but determinedly marching up Eagle Summit ahead of Jake Berkowitz’s team, and then Jake and Brent standing together on the finish podium, lofting their beers at one another. And then there was Susie Rogan’s tracker, veering wildly off-course and showing a steady trek away from the trail, and then slowly turning around… and finally she mushed under the finish banner as green-hued northern lights danced overhead! After the finish formalities, the interviews and the photographs, her partner Hans Gatt, a four-time Yukon Quest Champion, motioned her into the sled, told the handlers to step back and “let the dogs go,” and he drove their team out of the chute and down the river to their dogtruck.

The mushers who travel in the middle and the back of the pack don’t garner the same world-class media attention as the first few finishers, but many of them don’t mind that, because they have different aspirations, different goals. Simply finishing with a happy and healthy dog team is a major accomplishment, and something many of these men and women will never do again. Taking a dog team 1,000 miles is expensive, in multiple and sometimes unexpected ways.

Successfully finishing the Yukon Quest is a bucket list achievement for some, while for others it’s simply a chance to travel through some of the most spectacular country on earth with some of their best friends, both canine and human. The fierce rivalries at the front of the race are rarely seen in the rest of the event, as mushers and their teams settle into the serious work of moving on down the trail.

*The 2013 Yukon Quest trail was shortened by the detour around American Summit, which plays into the total race time. 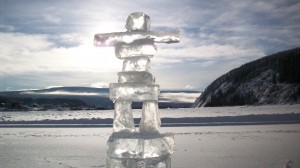 Inuksuk on the Yukon River, Dawson City, 2008 Yukon Quest. Photo by Helen Hegener/Northern Light MediaThe 30th anniversary running of the Yukon Quest has brought it all together for an exciting event, and as the mushers make their way over the Yukon trails to Dawson City, their fans from around the world are finding plenty to help them keep track of their favorite teams.

There are some world-class media covering the race, starting with Mark Gillett and his crew, who galvanized race fans last year with their beautifully edited videos such as The Start, The Story, and the fast-paced and funThe Race is On. This year they’re already showing their chops again with their first video, YQ 2013 The Start.

There are many other videos showcasing the mushers, each a glimpse into the personal lives of the men and women who choose this lifestyle with huskies and sub-zero temperatures and northern lights and the pure unbridled joy of living in the north country. Check out the beautiful Wild and Free Life about perennial favorite Brent Sass. SP Kennels, home of 2012 second-place winner Allen Moore and the 2000 Yukon Quest Champion Aliy Zirkle, has a multi-year archive of great mushing videos. And four-time champion Lance Mackey has a crackerjack media team this year, keeping fans updated via Facebook and theComeback Chronicles, and posting some delightful videos such as the secrets of what’s in Lance’s Yukon Quest sled. The official Yukon Quest videos can be found at YouTube.

“The visibility worsens and now Bruce cannot see his leaders in the swirling merger of snowpack and wind. He searches anxiously for a glimpse of a wooden stake that will tell him that his dogs have not wandered off the trail, perhaps to the edge of a cliff. Bruce is not conscious of time or of distance, but only of the wind in his face. The dogs appear to be moving forward, but there is no way to measure progress.” ~John Balzar, Yukon Alone

The premier source of information, of course, is the Yukon Quest website and their frequently-updated Facebook page. The website has all the musher profiles, current race updates, live tracking, and great resources such as a listing of all the past champions and a very informative Musher’s Guide to the Yukon Quest Trail. There’s a brief history of the Yukon Quest, a fly-over trail map, and profiles of the race officialsand veterinarians.

Articles about the Yukon Quest can be found in a wide variety of publications, from theFairbanks Daily News-Miner to the Whitehorse Star, the respective newspapers of the two race-anchoring cities. In Alaska the Team and Trail column in Alaska Dispatch tracks sled dog races, while back in the Yukon the aptly-named Yukon News often features news of the race. The Anchorage Daily Newsruns race updates daily, with a special section on sled dog racing. 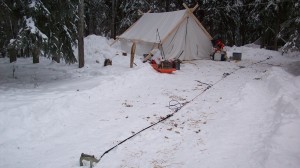 Features at Wikipedia include a detailed history of the race, a map and a checkpoint-by-checkpoint description of the route, a bit about the expected weather, the participants, the dogs, the entry requirements, the rules, awards, penalties, the Yukon Quest 300 and the Junior Yukon Quest.

“Iditarod has stiffer competition, but the Quest trail is vastly harder, it’s not just the mountains. It’s theYukon River itself. Iditarod only has about a hundred and thirty miles on the Yukon, the Quest stays on the river closer to four hundred miles.”    ~Brian O’Donoghue, Honest Dogs

In an article for the Yukon Quest website, The Historic Trails of the Yukon Quest, sled dog historian Jeffrey Dinsdale, a volunteer writer for the 2013 race, recalls the names of some of the early mushers on the trail: “Mike Mahoney … travelled north from Dawson City all the way to Fairbanks, as did other dog freighters like Arthur Walden; ministers like Hudson Stuck; mail carriers like Charlie Biederman, Percy de Wolfe, and Ben Downing; news reporters like Tappen Adney; and traders like Jack McQuesten. In the process they firmly established the winter transportation routes between Dawson City, Forty Mile, Eagle, Circle, Central and Chatanika, the communities along the present day Quest trail that travels over both Eagle and Twelve Mile summits.”

Northern Light Media will be on the Yukon Quest trail again this year, meeting the teams at the northernmost checkpoint, Circle City on the Yukon River. In the meantime, here’s to fast trails and happy tails!