The 2013 Northern Lights 300, which finished on Monday, set a blazing pace from Big Lake to Finger Lake, while keeping fans at rapt attention with some very surprising developments along the trail. It was a race which generated some compelling ‘tales of the trail’ for Monday evening’s banquet, and as the mushers told their stories to an appreciative and joy-filled audience, there were still a few sighs of relief from those who’d been behind the scenes when they happened.

On January 11, just a week or so before the race start, warm weather was causing concern and race organizers were working on back up plans for a trail if plan A (to Finger Lake via same trail as last year) fell apart. A week later, January 17, things were still up in the air and the NL300 Facebook page noted, “Our number one priority is a safe race trail and our number two priority is getting this qualifying race run. Keep checking this page for more information.”

Implementation of the backup plan was announced on January 21: “Due to trail conditions, we have made some changes to the race course.”

The start was moved from Martin Buser’sHappy Trails Kennel in Big Lake to Deshka Landing, just west of Willow on the Susitna River. From there the trail more or less followed the Big Su to the mouth of the Yentna River, then up the Yentna to Yentna Stationfor a four-hour layover, then upriver to Skwentna, over the hills and across Shell Lake to Finger Lake, where the teams would take a mandatory six-hour rest. Returning down the same route to Yentna, another six-hour rest, and then to the finish at Happy Trails Kennel, around 47 miles.

Moon in the sunset over the Yentna River, about two miles below Yentna Station. Photo by Martin Buser.

There were concerns about this new trail being where the Iron Dog snowmachiners were practicing for their upcoming race, so the media was alerted with a press release. News media from the Mat-Su Valley Frontiersman to Alaska Magazine picked up the release and word spread quickly and effectively throughout the local snowmobiling community. Mushers were cautioned to keep their headlamps on at all times through certain parts of the trail: “There are some very tight sections of trail on this section where head on passes are going to take some serious cooperation should they occur. For safety’s sake, put the race aside and work with each other to make the pass safely.”

The race started on Friday morning at Deshka Landing, just west of Willow, and photographers Julia Redington and Donna Quante captured the excitement of team after team leaving the starting area smoothly. Donna Quante, of Husky Productions, shared her beautiful images of every team leaving for Finger Lake. With all 30 teams successfully launched, the race organizers settled in to wait for updates from the first checkpoint.

The first updates came in around 2 pm, mushers started arriving at Yentna Station for their mandatory four-hour layover. As the mushers headed upriver to Skwentna and Shell Lake, the temperature started dropping severely; before the race was over there would be reports of close to 45 below. There were many reports of northern lights blazing across the sky, which no doubt delighted the mushers and checkpoint volunteers, but the interference generated by the aurora “noise” made it difficult to receive updates, so the leaderboard sat empty until the front-running teams started arriving at Shell Lake around 11 pm. Checkpoint volunteer Christopher Michael met the outgoing mushers, took their bib numbers and called race central, and the time for team after team was posted to the race’s Facebook page. Race volunteer Emily ‘Alaska’ Krol posted on Facebook: “Full moon. Stars bright. Crystal clear sky. Beautiful aurora. ‘Tis a gorgeous night.” 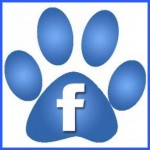 On the Facebook page for the Northern Lights 300, fans were asked for a show of hands every so often, and it was fun to see a broad base of armchair mushers who were watching the teams, hailing from all over the globe and reflecting an international interest in the sport, along with mushers in the race from points as far away as Brazil and Australia. In addition to locations all over Alaska and in dozens of other states, mushing fans chimed in from Australia, Germany, Holland, Norway, Switzerland, Spain, Belgium, Canada, France, New Zealand, and even South Africa! 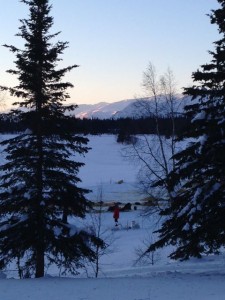 Seventy-five miles later, at Yentna Station, Ray had whittled Nicolas’s lead down to one minute, they arrived at 1:46 and 1:47 respectively. DeeDee arrived at 2:38; and Kelly Maixner, with a 16-dog team, had moved into fourth place, arriving at 3:00. The last leg of the race, approximately 47 miles to Martin Buser’s Happy Trails Kennel, was all that remained after another mandatory six-hour layover.

Nicolas Petit pulled his snowhook and headed for Happy Trails sharply at 7:46 pm with 12 dogs, Ray Redington did the same one minute later at 7:47, leaving with a team of 11 dogs. Dee Dee Jonrowe left at 8:38 pm, still with all 16 dogs in harness. A text message came into race central that two teams were spotted at Susitna Station, 30 miles out, at 10:34 and 11:00. Theories about what that meant were tossed around, with the most popular being voiced on the Facebook page by veteran musher Aaron Burmeister  of Nenana: “I know that Ray wouldn’t let Nicolas get that far ahead so I am betting Ray went by right behind Nicolas with his head lamp off and that was DeeDee catching up from behind 25 minutes later…”

Volunteers waiting at Happy Trails Kennel stood in the sub-zero temperatures and watched into the darkness for a headlamp, listened for any telltale sound of a musher running without one. At 12:35 am the word came and a post went up on Facebook: “DOGTEAM!” A moment later another announced “Two teams coming in…” Finally, at exactly 37 minutes after midnight, Ray Redington Jr. drove his team across the finish line to claim first place! Nicolas Petit arrived four minutes later, at 12:41 am; and DeeDee Jonrowe drove her 16-dog team across the finish at 1:45 am. The 2013 Northern Lights 300 had been won by Redington Kennels! 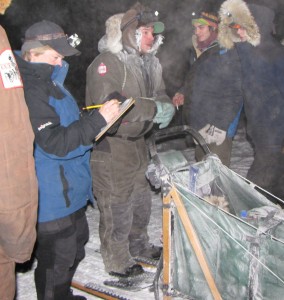 Mushers continued to arrive throughout the day Sunday, happy and smiling mushers congratulating the volunteers on a terrific race with great trails. There were many comments about the Northern Lights 300 once again being bitterly cold, but most agreed that in this sport that comes with the territory. More than one musher commented that the NL300 is good training for the always-sub-zero Yukon Quest!

As the morning progressed, with mushers arriving every so often, it began to dawn on the race manager, Sue Allen, that one musher was missing. She began asking mushers who’d arrived if they’d seen her, she called checkpoints, talked to volunteers and gathered as much information as possible. A report that the veteran musher, Miriam Osredkar, had not been feeling well at Yentna caused concern; when a musher isn’t feeling well there are many things which can quickly go wrong, exacerbated by temperatures which were still hovering around 20 below. Finally, at 12:45 am, after studying area maps and considering all the possibilities, the race manager gave the word to enlist help in finding her. Pilots were contacted for air support, Trail Boss Lou Shrader headed back out onto the trails to search, Martin Buser harnessed a dogteam and started down the trail…

A news release was sent out to media: “PLEASE READ: The NL300 is searching for a missing musher and team. Miriam Osredkar is driving a 12 dog team, she left the Yentna checkpoint around 3 am Sunday morning and she is several hours overdue at the finish at Martin Buser’s Happy Trails Kennel in Big Lake. She is wearing a blue coat, and she is driving a tail dragger sled with a grey and green sled bag. If you have any information about her please call….”

Within minutes the news release had appeared in so many places that the race manager received a phone call from an Associated Press reporter asking for details. Ten minutes later Miriam mushed her team into Happy Trails, smiling and elated at finishing. She’d mushed her team all the way back to the start at Deshka Landing, and upon realizing her mistake, turned around and mushed right back downriver to Happy Trails! She was fine, her dogs looked great, and she said the trail had been just beautiful!

Miriam’s wasn’t the only ‘tale of the trail’ to come out of the race. There was the loose dogteam which checker Christopher Michael chased down and saved at Shell Lake; there was the puzzling zigzag trail of one of the few teams which had a tracker on board as it wandered from one side of Shell Lake to the other and back again; there was the trail sweep who blew a piston on his snowmachine at the far end of the trail and ended up being towed 134 miles by his brother, the other trail sweep; and then there was the musher whose team quit at Finger Lake, so the musher, not wanting to necessitate checkers remaining at their checkpoints for him alone, called in and announced that he was scratching. The next day all the checkpoint volunteers were flown out, and he started the long trek home with his team. 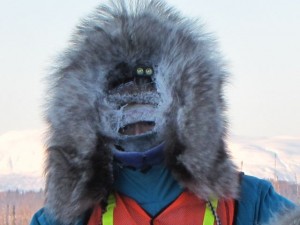 Race officials tracked his progress via residents who lived on the lakes and rivers along his trail, and updates were made to the Facebook page as he made his way downriver. Just before midnight on Sunday evening he mushed into Yentna Station, settled his team for the night, and “…got a hot meal and is resting in a nice warm cabin.” The next morning he harnessed his team and continued his journey to the finish.

At the Awards Banquet that same evening, the race manager announced that the final musher had done everything the 29 teams in front of him had done, and he’d done it all right, it just took him longer. So the decision was made to reinstate his team and he was officially named the 30th place finisher of the 2013 Northern Lights 300. 30 teams started, 30 teams finished, and all 17 teams needing a qualifying run for either the Iditarod or the Yukon Quest received their certificates.

There was one last ‘tale’ to tell at the banquet. On the way to the dinner, one of the trail sweeps, Chris Hegener, found a dogsled in the middle of the Parks Highway. Dodging traffic to load it into his truck, he asked about the owner at the banquet, but no one had lost a dogsled… Finally someone recognized the sled; it turned out to belong to a longtime Iditarod veteran who had been training in the area over the weekend. Even after the race was over, and even having lost his snowmachine on the race, the intrepid Northern Lights 300 trail sweep was still doing his job!